Sporting exchanges hold a special significance at John McGlashan College. We have only one winter sports exchange for the senior school, so it takes on extra importance.

St Andrews arrived in two shifts; basketball and football on Sunday, 18th June and all other codes on the following day. Basketball began on Sunday evening and Monday lunchtime. Both games pulled good crowds. STAC pulled away in the fourth quarter on Sunday night to win comfortably. The next match was a real crowd pleaser. With the gym packed at lunchtime, JMC hung tough and eventually tied the game up at full-time. Alex Byars started with a series of three point bombs that dragged JMC back into the game. The extra time went the way of STAC. Their two big guns were always a threat that drew many costly fouls.

Our first XI savoured the chance to battle against one of Canterbury’s top-ranked secondary school football teams as part of the STAC exchange, with a key aim being to erase memories of a heavy defeat against them in 2016.

The match started ominously when our opponents scored with relative ease in the opening minutes; our keeper George Sinclair did well to dive right and block a strong initial shot from STAC but was powerless to stop the match’s first goal being scored off the rebound.

Despite this initial set back, the JMC lads soon found their composure and settled into playing quality football against a team that offered plenty of enterprise on the attack as well as a very solid defence.

Centre-backs Jordan Mitchell and Matt Johnstone were aided in their defensive efforts by Alex Thomson’s aggressive and disruptive defensive midfield play, while Charlie Gruppelaar and Yugen Miyahara worked hard on both defence and attack from their wing back positions.

Match day captain, En Watanabe, was typically tireless in the central midfield, linking up well with our enterprising and committed attackers Harry Fraser, Harrison Biggs and Sam Tomkins. But it fell to our striker Dan Tan to bring McGlashan level with a spectacular long-range volley that looped high over the keeper’s head and dropped perfectly into the goal. This left the score locked up 1-1 at the break, with as little to pick between the teams as the scoreline suggested.

Breaking the deadlock in the second half proved no easy matter, despite the best efforts of the above players and our hard-working substitutes Ben Lund, Shay Veitch, Tom Warman (all who also enjoyed game time in the first half) and Callum Duncan. STAC was likewise struggling to find a winner until, with just a few minutes to go, a single McGlashan defensive lapse allowed our visitors to tap in a soft second goal.

With McGlashan unable to find an answering goal before full-time, the game ended with a disappointing 2-1 victory to STAC when a draw would probably have been a fairer reflection of the match.

Even so, McGlashan had every reason to be satisfied with its competitiveness against classy opponents. The fine spirit of which 80 minutes of very intense football was played was also a credit to both teams, as well as our top-class match referee Jeff Clamp.

Thanks are also due to our non-playing reserves for the match – Jack Nicholls, Jaiden Tucker, and Joseph La Hood – and to Paddy Wennekes and Quinn Campbell for touch judge duties.

On 20 June, the boys woke to a very frosty morning which meant a very frosty hockey turf, unplayable in fact. With a slight delay for the sun to rise to thaw out the turf, the whistle finally blew, and we were under way.

One thing that we wanted to take into the game was a good start that contained a lot of energy and good composure. Unfortunately, the complete opposite happened and we never managed to string anything together from the back, and this led to a bundle of turnovers with a lethal counter attacking STAC team to come firing back at us. As a result of our lack of composure on the ball and the excessive amount of turnovers, STAC put four goals in the back of the net in the space of about four minutes. In most cases, teams would drop their heads completely; we managed to lift our heads and play some proper hockey. We kept even with STAC for the majority of the first half following the four quick goals and had some decent phases of play that resulted in some circle penetrations. Due to some lack of experience surrounding 35-minute halves, our fitness was tested, and we had a disappointing finish to the first half where STAC were able to slot another goal in following a slick PC.

Five-Nil was a very disappointing way to go into halftime and most definitely not what we had planned for. During the break, we addressed areas that we needed to adjust; the structure that STAC were playing and our attitude. We came out firing at the start of the second half and put STAC under some real pressure. This pressure resulted in a PC where we were finally able to score our first goal. Following this was some nicely contested hockey, and the game had periods where we kept very even with STAC and dominated in many areas. However, our fitness was under the pump near the end of the second half as we were playing 20 extra minutes compared to what we normally play. STAC was able to put three more goals in behind us. The game ended in an eight, one loss for JMC.

On reflection, the loss was a real wake up call for the team and going forward we have already addressed many areas that need work. However, we cannot take anything away from STAC as they are a well-drilled side with a lot of experience and many representative players. They currently hold a national ranking of 4th in the country, and we are lucky to get the opportunity to play an unfamiliar team from outside of Dunedin. We can take this experience and build on this for the rest of the year as we prepare for the tournament in Hamilton at the end of the season.

Our JMC Badminton team of Andrew Goh, Jin Kim, Matthew Godfrey and Lachlan Kenneally fought well in their Interschool match. All members of the team enjoyed the challenging, and all games were very close. Unfortunately, in the end, we were only able to win one game. We lost one, five with our heads up knowing we did the best we could. We look forward to the competition next year.

The John McGlashan 1st XV had a convincing win over St Andrews 1st XV this year with a score of 43 - 17. The McGlashan team imposed their structure very well against STAC. In the first half, McGlashan got out to a comfortable lead of 29 - 5. In the second half STAC came back firing, scored a couple of quick tries to take them to 17 points, but in the end, McGlashan’s speed and strength were too much and finished with a comfortable win for the 5th time in a row. Young Andrew Mckenzie, only 14, had an exceptional game in the number 15 jersey for McGlashan where he managed to bag himself a try and a conversion. He also ran into the backline very well putting players around him in good holes. Overall an outstanding performance from the young man.

The STAC exchange started off with a hiss and a roar as Tuesday morning rolled around. STAC, coming down the previous day had one trapshooter in the hostel, and the others in the STAC squad were scattered throughout the day boys in the McGlashan team. We headed out to the Dunedin Clay Target Club to get the day started by 9:00 am. The bus ride out was enjoyable while having the opportunity to meet some of their boys such as their team captain Lawrence.

Coin toss time and John McGlashan choose to shoot first to try and set a high mark to beat. Things didn’t go to plan for McGlashan as we didn’t front up and ended up losing to the STAC boys by a mere 9 points. This loss helped to contribute to STAC’s 4-5 win for the interschool competition, and I wish to congratulate them on coming down here and showing us where we need to improve. Congratulations to Alex Dodson on getting high overall for the day with 88 out of 90. 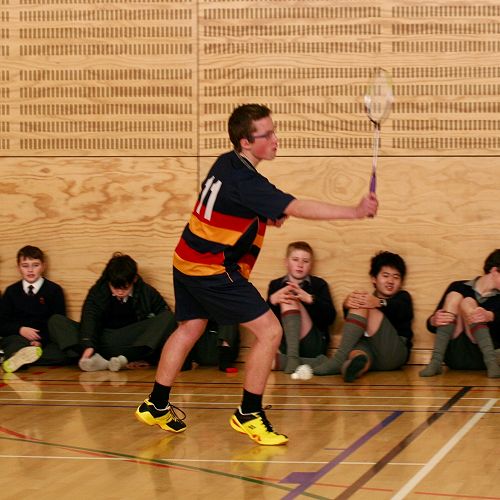