When five fully-laden sacks of a brand new edition of an IB Maths textbook arrived here at school, courtesy of Oxford University Press and Royal Mail, it seemed like Christmas had arrived early ...  not a cent to pay, either for the books or the postage.

The story begins near the start of 2014 with some Year 12 students in Mr Murdoch's Standard Level IB Maths class.  At that stage, the first edition of this particular textbook had not long been published.  Using it in class and at home, the students began to discover the odd mistake here and there, and started communicating (respectfully!) about these mistakes with the publisher. No doubt there were others around the world who were offering similar feedback as well. Recognising that perhaps some of the original proofreading had been shoddy, the publisher (Oxford University Press) began work on a second edition. Along the way, Mr Murdoch was invited into some brief email dialogue with the development editor ... but not for a moment did we expect such an overwhelmingly generous gesture when it came to the printing and distribution of the new edition ... honestly, we were blown away!

Anyone up for Standard Level IB Maths next year? Or the year after that perhaps? 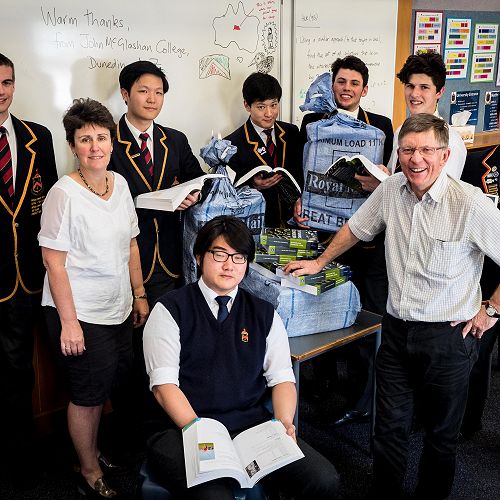