John McGlashan College hosted Waihi on the 22nd and 23rd of March this year.

For the first time Waihi agreed to compete in other than their traditional sports of cricket and tennis. Both schools agreed Touch would be played upon Waihi’s arrival on Tuesday afternoon. We played two matches and Johnnies won both games, 9 -2 and 7 -3. It was great way to kick the interchange off and break the ice between the schools. All John McGlashan College boys played well, especially Elias O’Kane and Orlando Tuhega-Valtupu.

In the tennis John McGlashan competed well against a traditionally strong Waihi outfit, eventually going down 10-5 all up. Doubles were played first up in the morning. Although the pairings of Calvin Ruru and Hamish Ross as well as Hayden Elliot and Daniel Johnson were beaten, top seeds Daniel and Anton Stoddard put on an impressive display of accurate baseline hitting to take their game out 9-1 and gain the College its first result of the day in emphatic style.

In the following singles matches it was again Stoddard and Lund who performed best, both winning their matches comfortably against their South Canterbury rivals. Lund in particular was very impressive beating Waihi's top player 9-1 while Stoddard did one better winning nine games to love.

In the afternoon session our boys all played very well and although they again only managed two victories, most matches were very tight. Hamish Ross narrowly lost his match against higher ranked opposition 7-9 whilst Ruru served with good accuracy to win his match 9-4. In a real cliff hanger Stoddard went down 7-9 to Waihi's top player. This was a game that could easily have gone either way with both players negotiating the wind to play excellent tennis. The final singles match saw Lund continue his dominant form, easily winning 9-0. His use of spin and powerful passing shots earning high praise from Waihi's coach.

For the cricket it was a chilly morning start at around 9:35am. Waihi won the toss and elected to bat. Waihi got off to a slow but steady start losing an early wicket. A few good partnerships were made by Waihi and they ended up with a total of 103. John McGlashan College then batted and unfortunately had a few early wickets go in the first half of the innings. They came within 30 odd runs in the last five overs. It was a close final over but eventually JMC fell short by two runs. Overall, a great game well played by both teams.

All the matches were played in excellent spirit despite their competitive nature and it was great to see the College spirit in action as each of our boys encouraged and urged their team mates on throughout the day. It was great to meet all the Waihi boys and was a really enjoyable interchange. Certainly a day well spent. 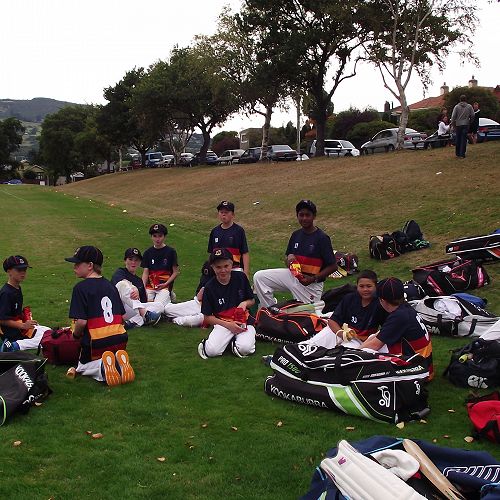