The McGlashan Year 7 and 8 football team played their Waihi inter-school match in cold but favourable conditions, after school in Week Three of this term.

The side settled quickly from the start and obtained the perfect start when Sheon Luxmanan swept home after a few minutes after great wing play from Quinn Coutts on the right. Luxmanan was not done though and the tall striker went on to score twice more in quick succession. His second a sharp close range finish and his third goal a bullet header from close range that would have graced any televised match from the UK.

With confidence high, McGlashan dominated possession for large periods of the half. Midfielders Harrison Marshall and young Akara Itadani provided plenty of quality ball forward, and clever wing play from Tom Dyer and Coutts meant there was plenty of dangerous balls put into the box. When Waihi did threaten strong defence from Thomas Meder, Oscar Grey, Jack Lewis and Charlie Bolton meant that keeper Seb Kyle had little to do but sweep up the odd long ball over the top. A few missed chances and some outstanding keeping from the Waihi goalie meant McGlashan didn't find the net again till late in the half. However, a fine strike from a distance by Jackson Cole and a neat finish by George Barker, after good support play from Sam Sinclair, saw the eventual score reach a pleasing 5-0 margin at half time.

After the break, fresh legs were introduced, and formations changed. The McGlashan dominance of play though continued with plenty of clever through balls and determined runs. Mitch Thorn worked well on the left, and Martin Brook added plenty of industry and creativity to the midfield. It was no surprise then to see a flood of goals come throughout the second half. Two nicely taken efforts by Dyer were added to by strikes by Kyle, Intandi, Isaac McConachie and Coutts. A 25-metre wonder volley to captain Harrison Marshall fittingly rounded out the score to an even dozen to nil in favour of John McGlashan at full time.

Despite the uneven scoreline the game was played in excellent spirit by both teams. No doubt the result was a pleasing one, but there is still plenty to work on in preparation for the much harder challenge of Balmacewen that is to come later in the year. Finally, all the boys would like to thank the supporters who came despite the cold to watch, Mr Carruthers and Dr Button for their amazing organisation skills and Mr Luxmanan for being so kind to referee the match.

John McGlashan made history in the Year 7 and 8 inter-school rugby match.

With the forecast predicting snow our hopes weren't high for a Dunner stunner on the date of our historic Waihi rugby match. But ever defying the odds, the searing sun melted away the early morning frost and set up a stunning day. Having not tasted victory against the South Canterbury prep school in all our years of playing them, we were fired up and raring to go. This showed in our warm up, by the end we found ourselves prepared and focused on our task and understanding the need to rise to the challenge ahead.

The game began for us with a hiss, and a roar and a well-deserved try in the first play after the kickoff. This year not from our rivals but one of our own. A pleasant surprise came not long after when we crashed over for yet another, going up 14-0 in no time. We were fighting hard with the help of our various waterboy’s inspirational messages.

After half time drinks Waihi came back at us hard, putting us under the pump for long periods of time. They had been a tough encounter, but we were still grasping the lead in the final few minutes, digging deep for ourselves and each other. A couple of last ditch efforts blew the final score out to 33-14. Much to the jubilation of the home side and our supporters.

A piece of history made in our minds that will remain forever. As a unit, we performed well, but some stand out performances came from Phoenix Abbott (captain), Orlando Tuhega-Vaitupu, Mason Gain, Marshall Macready, Nic Casey, Tom Fowler, Solomon Harcombe and Ollie Sinclair, along with many others. Try scorers were Marshall Macready (2), Phoenix Abbott, Fynn Allison and Amani James. Also Mason Gain was 4 from 5 off the tee. The whole group would like to thank Toby Jarvie and Reon Lowery for giving up their time to coach.

By Solomon Harcombe and Orlando Tuhega-Vaitupu

In the Waihi exchange, the hockey boys were expecting a tough fight, and that is exactly what they got. It was a great game all round with Seb Kyle scoring a good goal on the post. As a team, we operated very well with both teams having lost of chances. However, on the day we couldn't execute these chances and we went down 4-1. I would like to thank the Waihi boys for coming down and all the supporters, umpires and coaches. Finally, for the boys who will be here next year good luck! 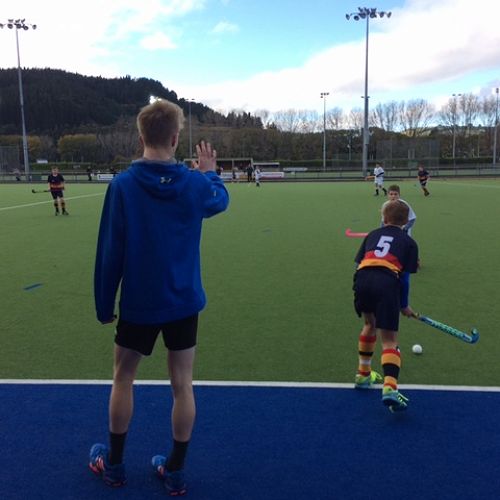 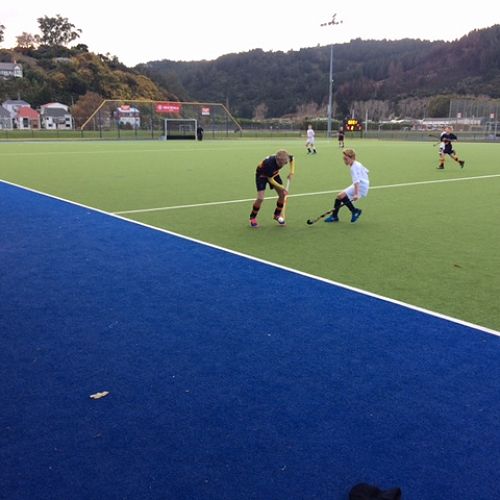 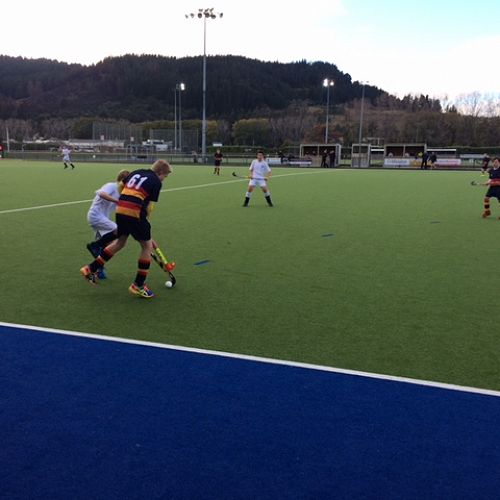 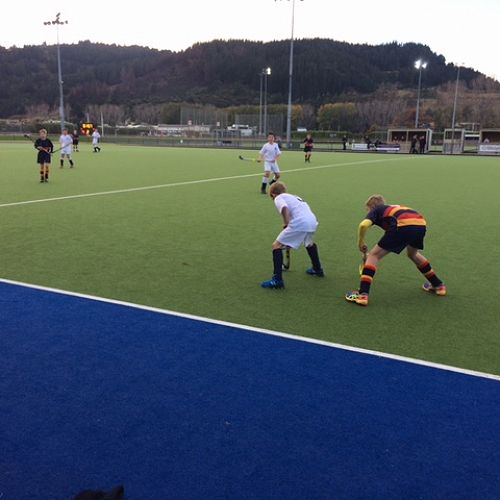 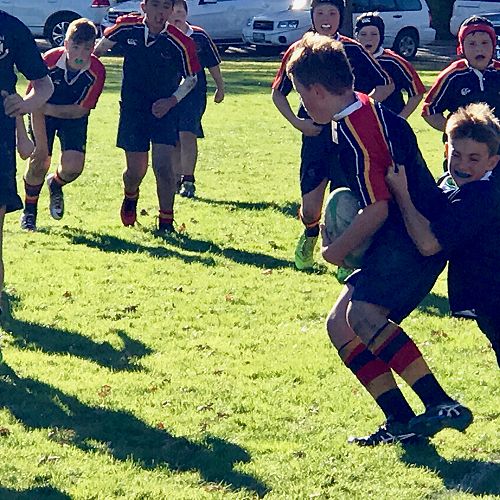 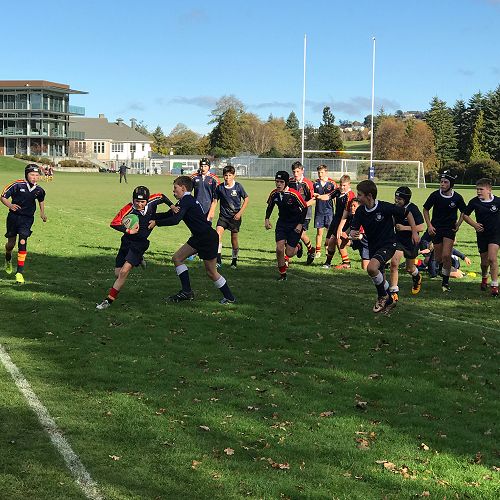 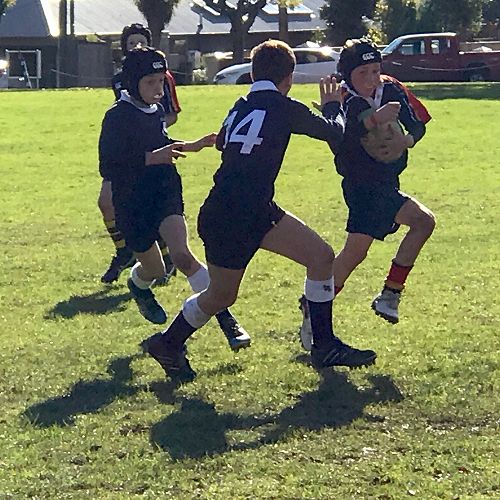 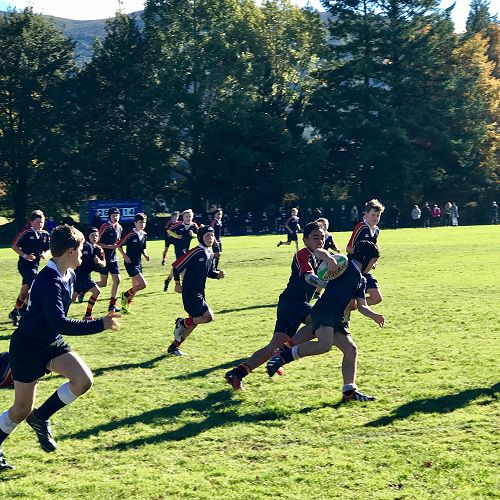 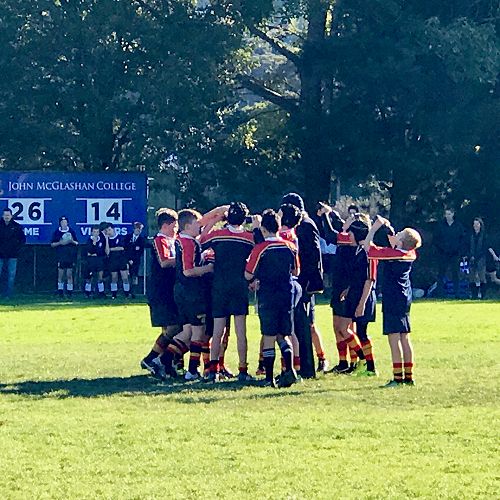