Wow, what a fantastic week at Berwick camp, aided by outstanding parent helpers and the stunning weather.

It was a Tuesday, but yet excitement radiated in the air. It was the day of camp. More and more people showed up, but everyone was desperate to get on the bus. It was like a group of piranhas anxious for their prey. After everyone was prepared, we rushed on the bus. The bus started moving and off we went. Every single soul in the bus was excited, but dreading the long, tedious drive to camp. However the ride wasn’t too long, and chatting made it go quicker.

The camp appeared into view around the final bend, and we were all desperate to get off. It felt as we were trapped and we needed to breathe as the air conditioning wasn’t working very well on the bus.

After sorting everything else, we were called to go to the wooden deck assembly area. We were sorted into houses, that's when the fun began. Each house rotated through one of the following activities, orienteering, abseiling, crazy swing and push cart/mini mud run. My house started off with orienteering. It was fun, but it was just following an out-of-date a map. The second activity was push cart; it was both fun and extremely freezing. You just drove an old, metal push cart into an ice cold murky lake. This was followed by a mini mud run that we all enjoyed, luckily we were allowed

After each house did two fun activities, we all had a delicious lunch and then did the other 2 activities. The remaining two activities were the best starting with crazy swing and going to abseiling. Crazy swing is where you are attached to a woven rope, and you swing around trying to catch coloured tags which each have a different value, you had to try and get as many points as possible in forty-five seconds. Abseiling, in my opinion, was a bit of a let-down. You only got one exhilarating turn, and after that, you just had to wait patiently. While doing the massively fun activities time seemed to fly. Out of the four activities, my favourite was easily crazy swing.

Then came dinner, we all waited patiently while the teachers would call up a house to get hand sanitizer and go and have dinner. The dinner was nachos, and it was truly amazingly delicious. After the spectacular dinner, we played for an hour. Then came the dessert, it wasn't my personal favourite, but other people ate through it like it was nothing.

After dessert, we were called once again to the wooden deck for night games. It was time for night tag spotlight with noodles. When hiding the adrenaline was running through me. Seeing all those bright white lights shining in my direction made me start to wonder who was shining the light. When it was over, we all went to sleep. I had no idea how everyone else felt but all in all the first day was great.
- Day 1 author Marek Leith Rickerby, 7Aho

Wednesday (day 2) started off with what felt like a 5.am wake up after our night walk the night earlier, we all woke up for breakfast ready for the day.

We started the day with kayaking in the pond around the corner from the camp where some boys would pair up and go in a double kayak while more confident boys would go on a single. I really enjoyed this activity because the water was still and it was very peaceful.

The second activity was the initiative course with Ms T; this activity was all about teamwork and patience. One of the activities was particularly challenging, where there was a yellow barrel with numerous holes around the side, the aim was to stop the holes with anything you had on you and your fingers and hands etc.

Later in the day, we made our way over to the abseiling wall for cliff face rescue. This activity relied on teamwork because our team had to carefully lower a stretcher with a student in it down to the bottom of the abseiling wall, everyone had their own jobs like holding the brakes, screeching instructions and working as a team the whole time.

After that there was Land Rover driving out on the paddock, we all had a turn driving an old army Land Rover with a parent helping in the front doing the acceleration. At parts, it was challenging and fun because your whole house group were sitting in the back of the car getting bumped around.

Next was the tree climbing, we were strapped to a harness and were being belayed by one of the other students in your house, about half of our group made it to the top of where the rope was tied, about halfway up the massive tree. After all the activities we were knackered and had some free time where we were allowed to use the confidence course, run around, kick a ball or just chill out.

The next activity was after dinner where we did a solo out in the bush in the dark; I really enjoyed this activity because of the peace and quiet I was given listening to nature and wildlife.
- Day 2 author Caleb Farrow, 7Mbe

The day had come. We were all geared up with our packs, boots and waterproof gear. We all loaded into the trucks, vans and cars ready for a long day. It took 15mins to reach our destination.

After all of the vehicles had manoeuvred up the tricky terrain and through the bull paddock at the Western Hills base (halfway up the Maungatua mountain range) we hopped out, and Evan (the adventure masters guy) gave us the important safety briefing. Once the briefing concluded with helmets on, we started off on our difficult journey. The trek was hard, weaving in and out of the rock-filled creek, treading carefully on mossy rocks and weaving between huge trees in the extreme Forrest. At the fork in the trail, we made a right turn, so that we were facing the final stretch of the hike. It was a dangerously steep hill that we had to zig-zag up holding a damp rope stepping over slippery roots of dead trees. We were all extremely relieved when we saw the place that was to be our base for the rest of the hot day.

At base, we had morning tea consisting of cookies, cakes, slices and fruit. It was satisfying putting the delicious food past our lips. The rest of the day was spent in working in our houses (Gilray, Balmacewen, Burns and Ross) doing fun ‘outdoorsy’ activities including the .22 rifle shooting with Mr James, the archery with Mr Veitch, the high ropes course with Evan Ms Trenberth PHIL Rasmussen, Mr Hore and Barbara Cuthill and of course the rock climbing, run by Ivan Diaz-Rainey and Year 12 awesome student Tyler Wilden, who had given up his time to be on camp with us. We did two activities then broke for lunch. For lunch, we had sandwiches with fruit and cookies we had made earlier that morning at camp. We all slumped down in the shade to get away from the penetrating heat and ate our food overlooking the spectacular view of the Taieri Plains.

After lunch, it was time for the other activities which doubled the fun of the day. All of the activities were exciting and an amazing challenge, with loads of boys gaining valuable confidence. Then it was afternoon tea; this was the same as the morning tea.

We all thought the fun for the day was over but then Evan said we could ride on the zip line down at the first base, so off we went down the ridgeline to get to the zip line, unfortunately one of our crew had a fall and hurt himself on the walk down and he had to go to A&E to get some medical assistance. When we got to the zip line we were pumped up and ready to go, the instructions were simple, attach your carabiner to the wire’s carabiner, and you were set to go. The last thing we did after that was put our exhausted selves into the transport vehicles and drive home ready for the evening activities, wow what a great day of adventure at Western Hills.

When arrived at camp we were able to have some down time before dinner. Dinner was fantastic as we moved all the tables and benches outside in the sun. After the main course, we had a run around for an hour before having dessert. When dessert was tidied up, we were able to play hide and seek spotlight. All the houses had a turn at finding the other campers hiding in the dark and scored points for the number they found. Gilray came out on top of this challenge, and we all enjoyed the fun and excitement of this activity.

Lights out came after supper, and we were all looking forward to bunking down for the night. Wow, what a day.
- Day 3 author: Jack Howley 7Atr

On the final day of camp, we got to have a sleep in until 8:30 am, and we all did. Once we had had breakfast and cleaned out our cabins, some fast finishers helped clean the common spaces as well. Follow this we had to choose to go with Mr Hore and play Pumpball or stay with Mrs Trembeth and go on the confidence course. There was an even split.

We had morning tea which was biscuits and home baking. Then headed off to the final activities for the week.

After we returned to camp and had lunch, we tidied up and had some free time for the last time while we waited for the bus. Finally, we packed the bus and had our camp photo on the flagpole mound and off we went back to McGlashan.

We all slept very well back in our own beds and recovered over the long weekend.
- Day 4 author Harrison Summers 7Aho

Acknowledgement: Without the dedicated and enthusiastic group of adult helpers on camp this year the camp would not have been such an amazing success. 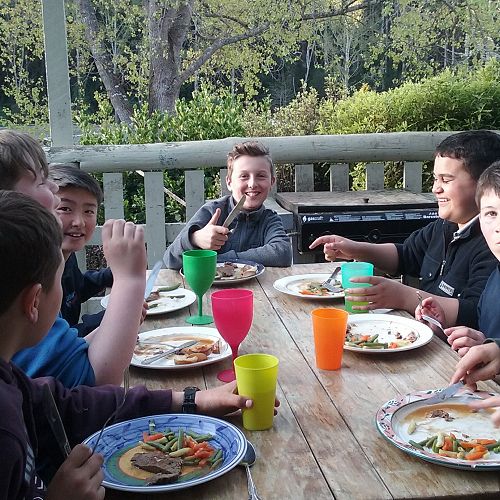 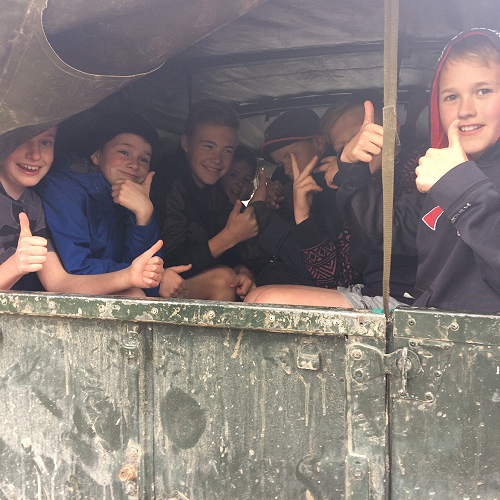 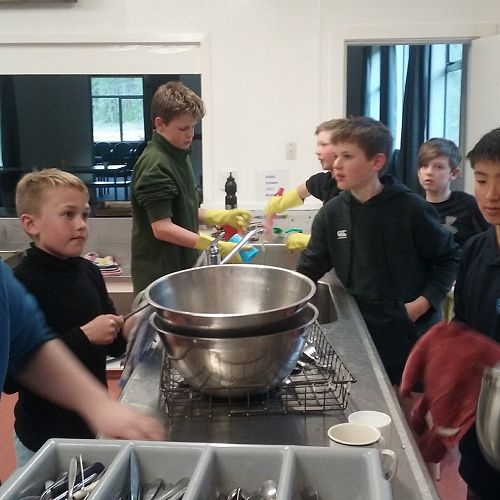 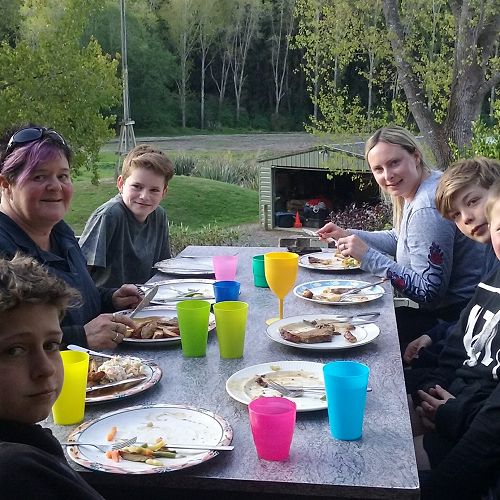 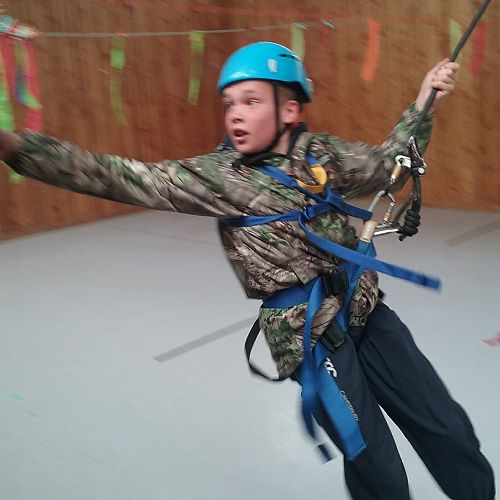 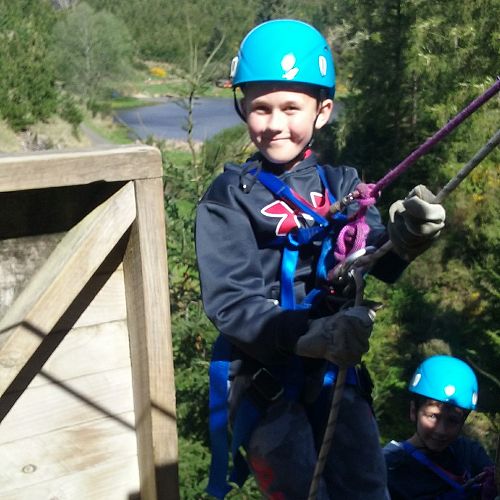 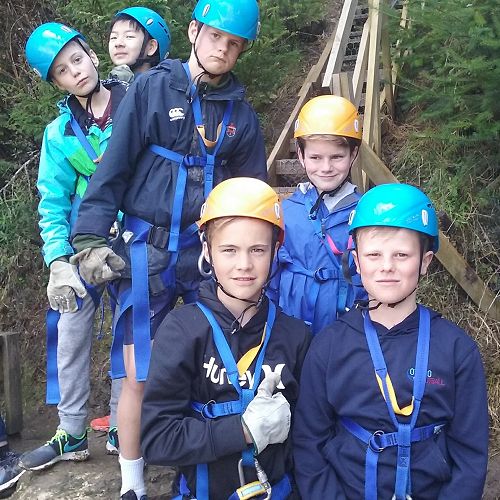 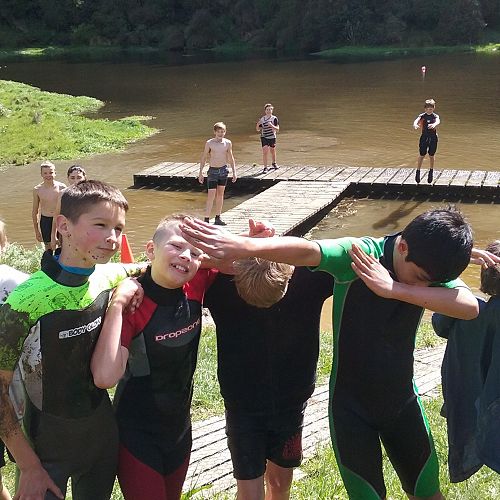 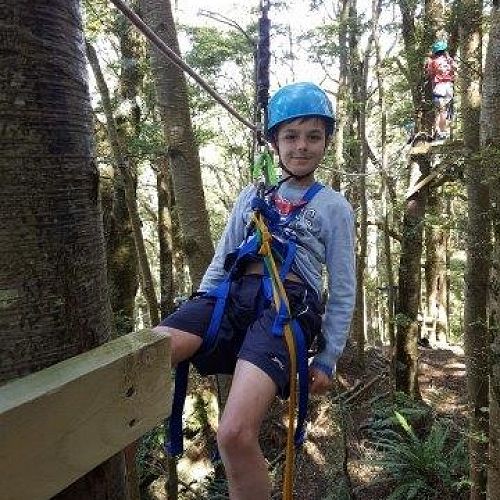 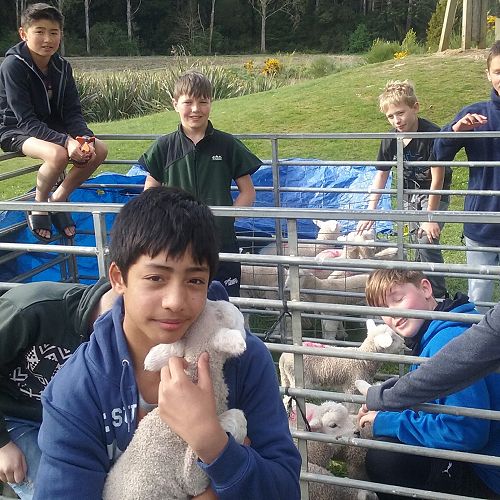 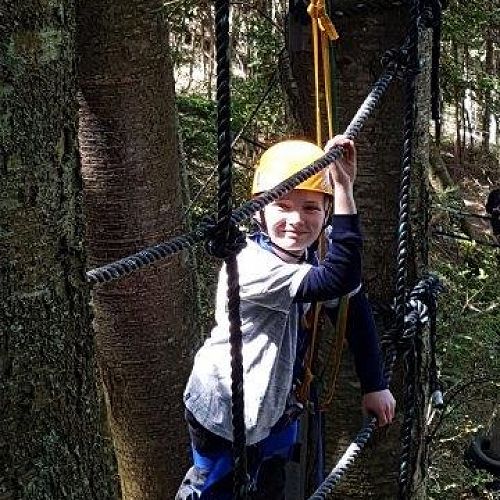 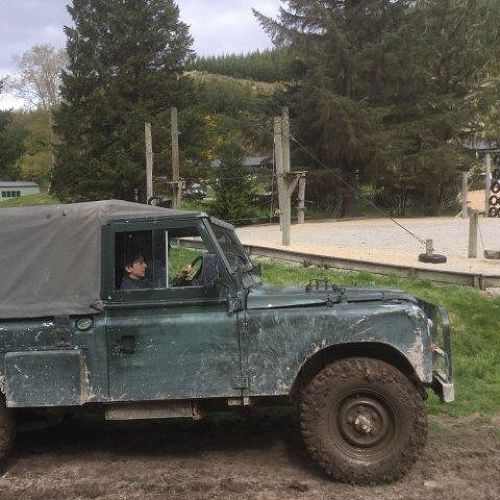 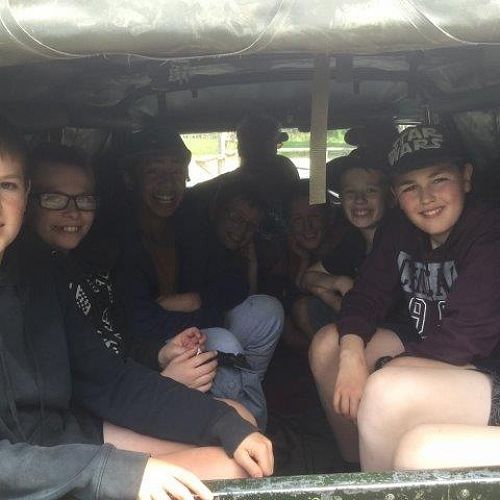 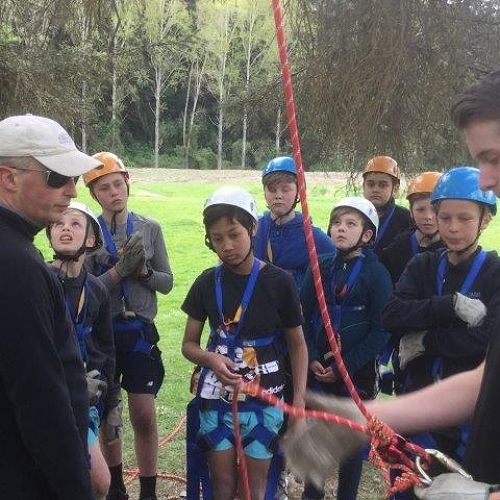 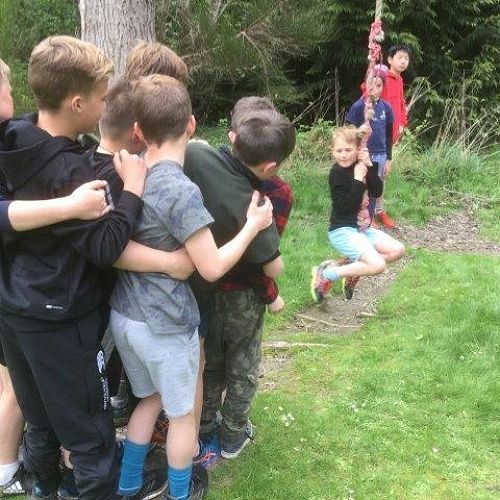 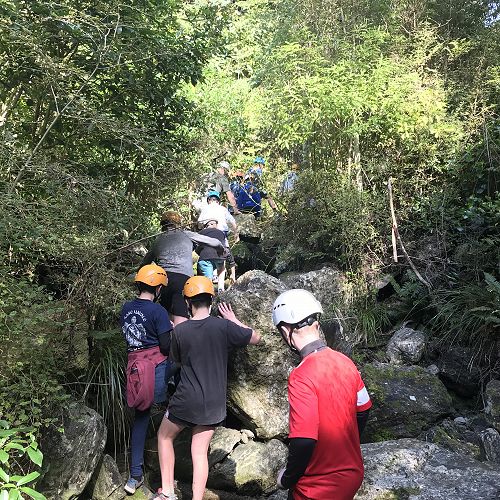 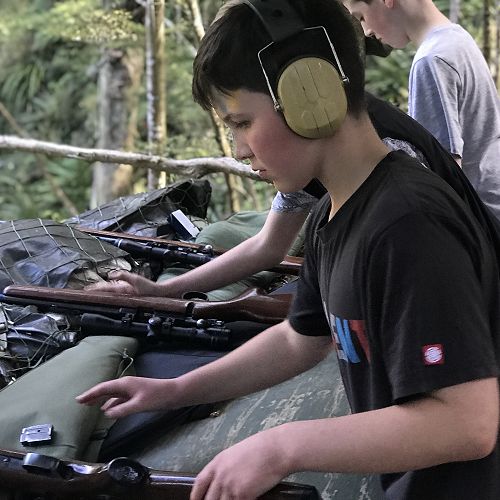 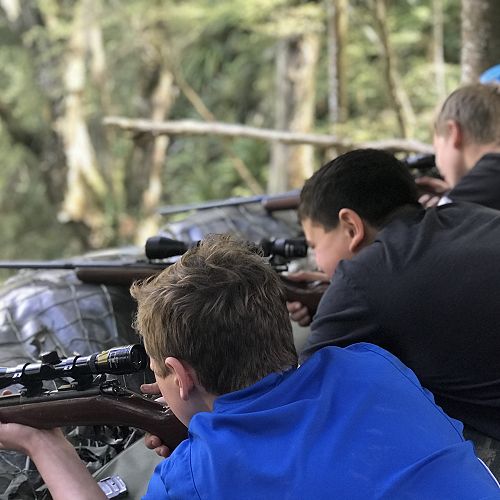 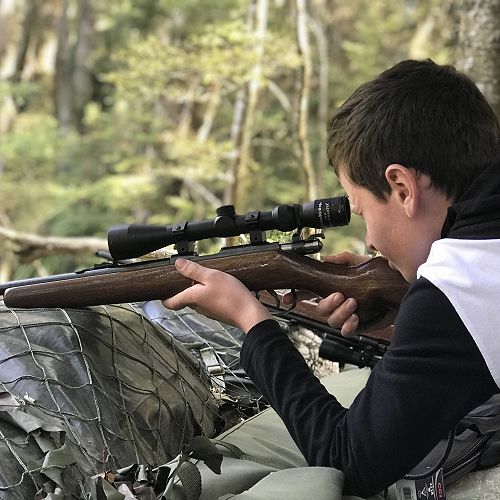 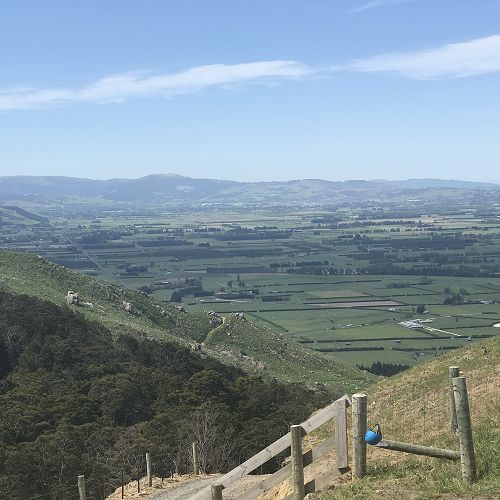 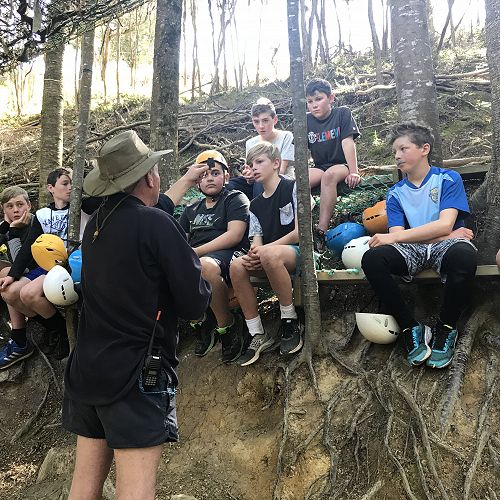 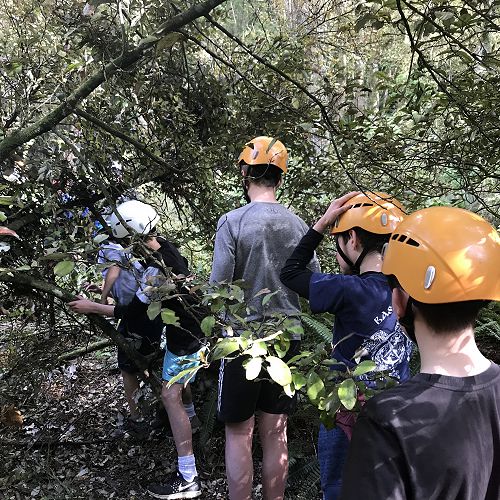 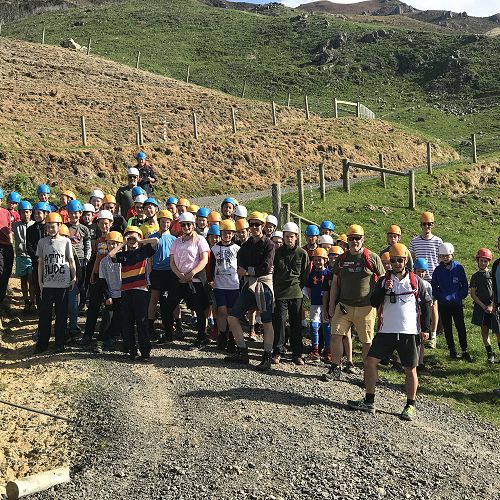 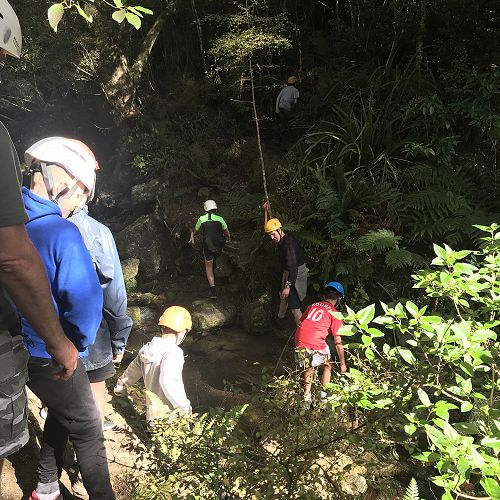 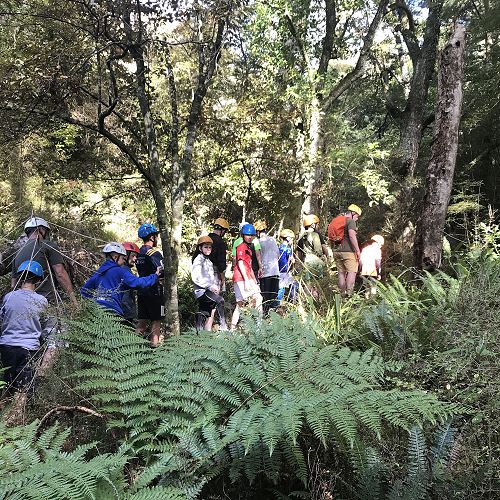 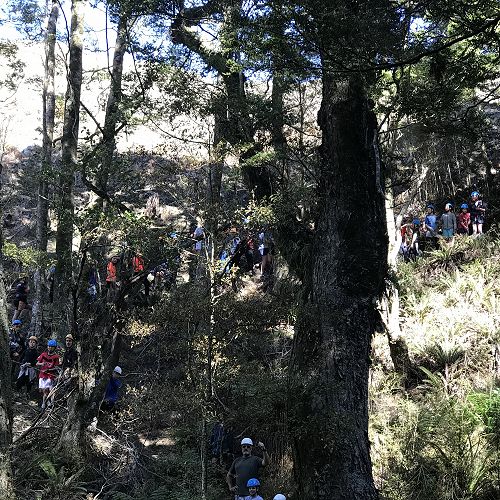 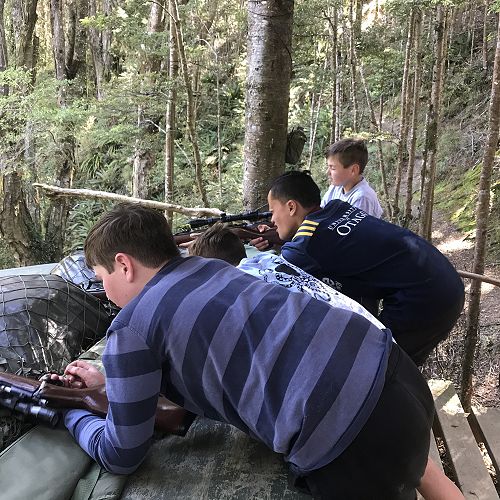 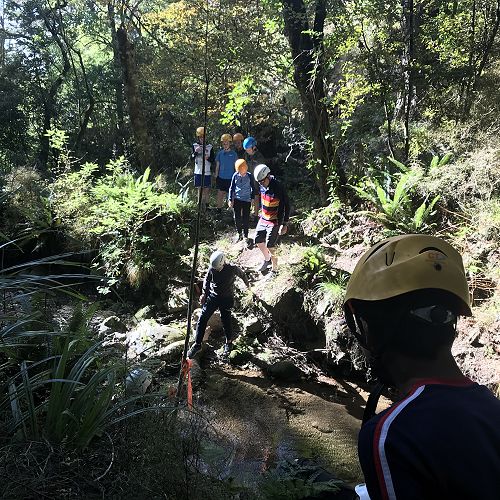 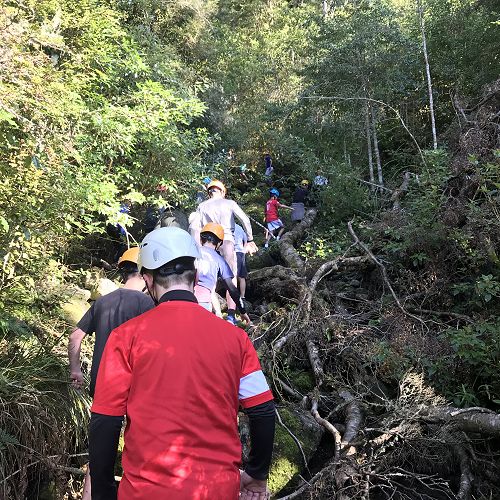