The previous year we had won the tournament. It was a bit of the unknown taking on Southland Boys High School in the first game, but the boys did what was asked of them and Cam Forde and Dominic Morrison bagged a couple of tries each putting JMC clearly out of reach of a comeback.

Our second game was against the Central Mustangs. This team looked to be the team of the tournament and played to a clear structure. However, Cam kept running hard and all the other boys tackled like lions. We did enough winning three tries to two.

We finally took on our neighbours, Balmacewen school. Balmac got out to a two try lead but we pegged it back and ended up winning by four tries to two. Andrew McKenzie who will be a border in Year 9 really stepped up with his running game and goal kicking.

Thank you very much to our coaches Ron Bull and Rory Ferguson who put in a big effort. Ron was a happy man and deservedly so. Rugby League continues to bolster rugby at John McGlashan College.

On the 14th of November some year 7 and 8 boys played in a Rugby League tournament. The schools that were in the competition were Southland boys, Central Otago Mustangs and Balmac.

The first game was Southland Boys, we comfortably won 26 - 6, the player of that game was Cam Forde who scored some amazing tries.

The second game was against Central Otago Mustangs who we lost to last year in the final, this game went very well as we won 16 – 6, the stand out player was Andrew McKensie.

The third game was a real tough one as we played Balmac and just won 12 - 6, Elias O'Kane had a great game.

Now was the semi final against Balmac. This one was an extremely hard game as we lost Tu Bull to a concussion in the first half, but we managed to win 18- 16. Dom Morrison was putting up some big hits and got player of that game.

Now for the big game - the final. Tu couldn't play so Elias went at dummy half and was passing great. We managed to work as hard as we could and pull out a 26 - 24 win with Dom Morrison saving a try in the dying second.

Dom, Andrew, Cam, Max and Elias were announced in the tournament team. Massive congrats to Dom who was named player of the tournament.

Thank you to Mr Ferguson, Rory Ferguson and especially Ron Bull who coached us and worked very hard to get everyone to know the game. 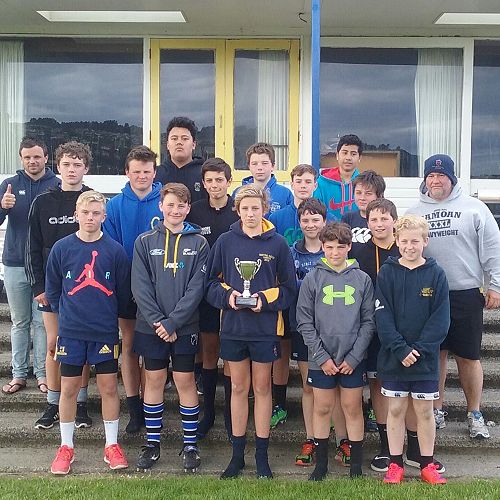