Xaviour Walker (#4006, 1993-99) has an extraordinary track record both on and off the field. As an athlete he was the recipient of the most number of sports blues while at McGlashan – 13.

At McGlashan he was captain of the cricket lst XI and in soccer 1st XI, debuting at age 15 with Dunedin Tech 1st team, and then playing internationally for Otago under 20 in United Kingdom, Malaysia and the South Pacific. But reading his CV it is clear that running marathons is his on-going passion. He trained with the late, great Arthur Lydiard for 3 years, and been with Olympic marathon medalist Barry Magee for the last 12 years.

Off the field his passion is medicine. He studied at the University of Otago School of Medicine from 2000-2006. He spent 2 years as a House Surgeon at Dunedin Public Hospital before moving to Australia and working in rural emergency medicine in Rockhampton, Queensland. In 2009 he moved to the USA for postgraduate medical training and did his Internal Medicine residency at Mount Auburn Hospital, Harvard Medical School, Cambridge, Massachusetts, where he also was Chief Resident in Medicine and a Medical Education Fellow at Harvard Medical School and stayed on as an Academic Hospitalist Physician. He did his Diploma in Tropical Medicine and Hygiene (DTMH) at renowned Gorgas Course in Peru. He then did an additional Public Health and Preventive Medicine residency at Johns Hopkins Bloomberg School of Public Health, where he did a Masters in Public Health and other public health fellowships including the National Institutes of Health (NIH). During this time he was also an Attending Physician at Howard County General Hospital Johns Hopkins Community Physicians. In 2016 he extended his medical interest to Geriatric Medicine and did his Geriatric Fellowship at the University of California, Irvine and is currently employed as an Attending Physician, Internal Medicine and Geriatric Medicine Kaiser Permanente, Orange County, Southern California. He is also a volunteer teaching faculty at the University of California, Irvine and medical specialist consultant to Google.

He has always been involved in organisations associated with medicine. This started from his time at the University of Otago. He is a past of President of both the Otago University Medical Students' Association University of Otago and the New Zealand Medical Students’ Association. In his various appointments around the USA he has held many advisory positions on education. In 2011 he was co-founder and was first Chair of the Junior Doctor Network, World Medical Association (WMA) which is the first global platform for junior doctors worldwide. He has helped write and pass multiple policies at the WMA including on social media and medicine, physician wellbeing, ethical standards of medical electives and has represented the WMA at the World Health Organization in Geneva.

His connections to New Zealand and Dunedin remain strong. On 9th November he organised a conference in Los Angeles that aimed to bring New Zealanders with success stories together to share their stories – ‘Kiwis Can Fly.’ The participants included Rod Dixon, Chris Lewis, and Dunedin’s own Skye Duncan (Columba Old Girl) and swimming coach Rick Laing. An outstanding initiative and by all accounts a very successful event. https://www.eventbrite.com/e/kiwi-conference-los-angeles-kiwis-can-fly-tickets-77591721929

A busy man. And the good news is that he is coming back to NZ in January 2020 to take up a position in the Dunedin Hospital as a Consultant Geriatrician and Senior Lecturer in Gerotonology, along with Pacific Island health roles at the University of Otago. Xaviour will be accompanied by his 3 children and his wife Jennifer. She is in marketing and was a college Basketball and Track athlete at Harvard, Executive MBA from Anderson UCLA. She has extensive experience in doing her own successful start-ups in Boston, PUMA and is now a marketing director for a large non-profit in Orange County, CA called Free Wheelchair Mission. We look forward to welcoming you back to Dunedin. 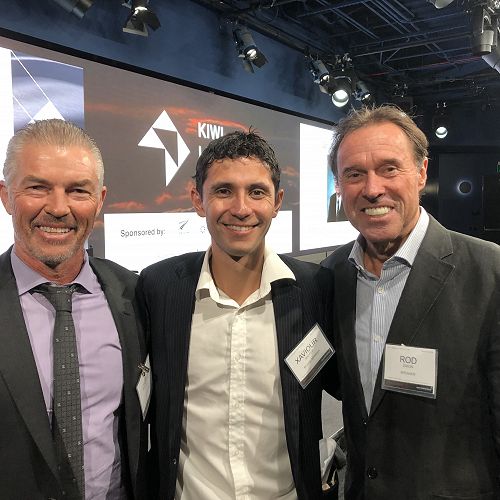