Close but not quite close enough!

The John McGlashan College year 7 and 8 water polo team made it to the final of the A grade South Island final at Moana Pool on Sunday 1st November. Unfortunately the team lost 4- 6 in the final to “Christ the King” school from Christchurch in a very tight and pulsating final.

This year there were 17 teams from Christchurch, Dunedin and Invercargill battling out for South Island intermediate schools water polo supremacy.

The final was a replay of their pool game, which ended up in a 4 all draw. Since both teams had the same win/loss ratio, Final pool placing’s would be determined by points differential. Unfortunately this meant that we had to pull out all stops against St Hilda’s and the team ran up a winning score of 21 – 0. Christ’s weren’t able to match this.

The semi final was against old rivals Balamcewen. The first half was a tight affair with the scores locked at 3 all. There was a strong defensive effort by Ben Monaghan, Finlay Milne, Oscar Lobb and Caleb Le Cong. In the second half Tevita Schaaf was a wall in goal thwarting all Balmacewen shots. On attack Max Wolf gained a brace of goals, while Tom Gold and Anton Stoddard added to the score to come away with a 7-3 score line.

Max Wolf was named MVP for the tournament. I would like to thank Alex Chirnside for his great coaching and calm temperament. 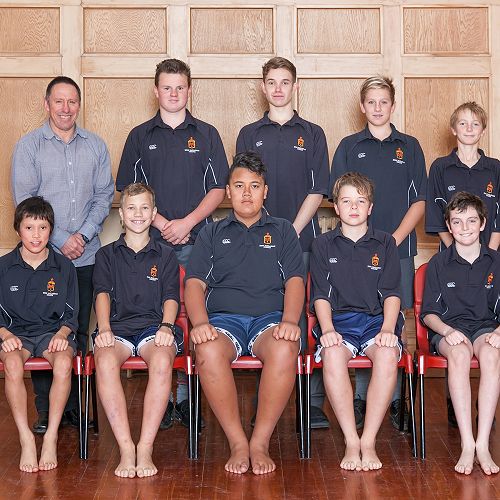