Held at Wellington’s ASB Stadium, the tournament featured 84 teams across the girls, junior boys and senior boys sections. We were one of 37 schools playing in the senior boy's section.

McGlashan earned progression to the round of 16 by finishing second in their group in pool play, with three wins and a loss from four games. We then had the misfortune to be drawn against eventual tournament winners St Patricks College in our sudden-death round of 16 matches up. After losing that match, we played two further games for a win and a narrow loss, securing a national ranking of 14th.

However, the team was reduced to seven a mere 90 seconds into our opening game against Kapiti College, when Bradley fell badly and dislocated his ankle. While Bradley made an ambulance trip to Wellington hospital to have his ankle assessed and ‘re-located’, the rest of us regrouped and awaited the re-start. After a tight first half, we eased away, winning by a comfortable 7-1 margin. Harry bagged a hat trick, Alex scored two, and En and Matt bagged one each in the victory.

We were then awarded a win by default for the second scheduled day one game. This was meant to be against Logan Park High School, whose morning flight from Dunedin could not land in Wellington due to fog.

Day two saw the lads targeting a morning win over St Bede’s. An intercept and a quick pass by Alex enabled Harry to secured a goal within seconds of the start, but expectations of a tight match proved spot on as our Christchurch opponents came back hard. A 2-1 halftime advantage was extended to 3-1 when Harry secured his hat-trick just after the break, but St Bede’s hit back within moments. Sterling work by George in goal and some scrambling defence was required to keep the scoreline at 3-2 all the way to the final whistle.

With progression to the final 16 now assured, we lacked intensity and focus in our final pool play match against Napier Boys High School. They were very tough opponents (and went on to meet St Patrick’s in the tournament final), but we still let ourselves down by conceding 10 unanswered goals.

A little more luck in the draw might have seen us progress into the final eight, but our play off opponents from St Patricks’ were simply too strong and skilled for a Johnnies team now down a further player, due Alex aggravating a toe injury early in the game. A brace of goals in the second half – one to Matt and one to Harry – did at least have us on the scoreboard; the final score was 12-2 to our opponents.

We played two further games to determine where exactly we would be ranked at the end of the tournament.

First up we faced a big battle against old foes Kavanagh, who like us had been knocked out in their top-16 match. Kavanagh got away to an early lead, but we came back strong to lock the score up 4-4 at the end of regular time. Unfortunately, we lost out in the ensuing penalty shoot-out.

Our final match was against Tarradale College from the Hawkes’ Bay. We didn’t play that well but still managed to ease away to a 4-2 win, and so end our three days of futsal on a positive note.

After scoring all four against Kavanagh, Harry scored three goals in that last game (En got the other), taking his tally for the tournament to 14. That saw Harry place third in the tournament golden boot trophy race.

It was great to be the first team to represent the school in a national futsal tournament, playing on courts close to double the size we have in Dunedin, and matching ourselves against new opponents, including the very best futsal schools in the country. 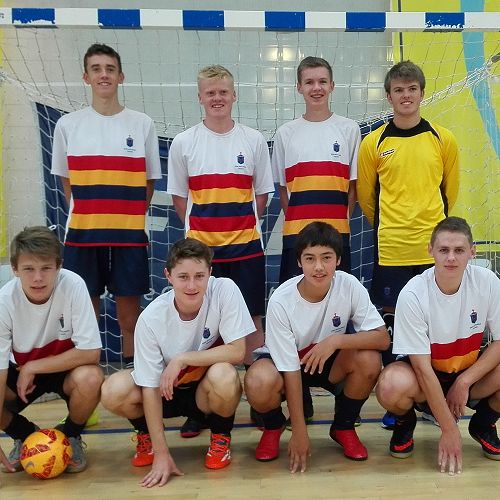