Yes, the weather was wet and cold, but the welcome was warm and the friendship which developed was worth getting damp for.

We started our journey to St Andrews College with a six-hour bus trip to Christchurch. Once we arrived, we were billeted out to the host families. With the morning in Christchurch providing rain and other awful weather, we set out to North Hagley Park, where we began our first game in some trying touch conditions. The St Andrews team looked twice the size of some of our Year 9 boys as they were all chosen from Year 13 as this would be their last interchange. We stood up to them and stopped them in their tracks. In a close game, McGlashan managed to take the first game 5-3.
In the second game, St Andrews put a more solid effort in, where the game ended as 5-4. It was a very close game with teams often scoring at each end. Once again the McGlashan boys had adapted to the weather and used it to their advantage. Unfortunately, the third game had to be cancelled due to ground conditions, but with two wins we had already sealed the win for McGlashan in the touch category. Overall it was a good exchange for McGlashan and was a lot of fun. We would like to thank all the parents and staff that helped out with this exchange and Scott Turner for coaching us. All the touch boys look forward to next year.
By Oscar Sycamore

It was a wet couple of days for most teams at STAC. The only rain that fell in the gym, however, was the hurt that rained down from Sebastian Sole as he terrorised the opposition.
The Senior-A volleyball team took out the series two, one with Sebastian leading from the front, with assistance at the net from Joe Brenssell, and big man Oliver Mouat. The team played a strong serving game which put STAC under pressure, and McGlashan's counter attack was too much for STAC to handle. Fergus Keiller chimed in with some great serve runs, and in the end, the boys were too strong. It was a satisfying win as STAC were seeded 8th in the South Island and so it capped off a very good season for the senior A's.

It was a cloudy and miserable day on Sunday the 12th of March when the McGlashan top 8 tennis players travelled up to Christchurch to play St Andrews on the Monday and Tuesday. The team consisted of Lachlan Kenneally, Tom Shallard, Bailey Godkin, Henry Power, Jez Nicholson-Kelly, Thomas Warman, Thomas Larivee and Anton Stoddard.
With a bad spell of weather hitting Christchurch the tennis was moved inside to Wilding Park. The St Andrews team consisted of a very strong side including two players inside the top 8 for their age group in the country. The boys gave it their all and left everything on the court however St Andrews won the exchange comfortably. Stand out performances went to young Anton Stoddard who came the closest of the McGlashan players, going down in a tie-break nine, eight. Jez Nicholson-Kelly also performed admirable coming back from five love (with the aid of his one-handed backhand) down, to make the match seven all before losing nine, seven.
Despite the tough loss, the boys gained a lot of experience and enjoyment from the trip. It was a fantastic learning curve for a young side, and everyone was better off for the experience. The side will continue to train hard and continue to improve over the rest of the season.

The golf was a tough gig in Christchurch this year. The McGlashan team consisted of Callum White, Robbie Perry, Hamish Brown and Jack Murray. Adam Woodhouse and Jaquan Mapusua also played in a separate competition. The rain was persistent, the course was sodden, but the spirits were high. Both courses, Pegasus and Clearwater, were in immaculate condition and scores were good considering the conditions.
After 18 holes both pairs were all square. In the afternoon, numbers one and two were paired together, while number three and four played together. These combinations resulted in the top pairing losing and second pairing winning.
Scores were all level going into day two, and the boys knew their results would be crucial to the overall exchange outcome. The format was match play at Clearwater, and the results were four clear wins to John McGlashan.
All the boys played well in difficult conditions. Some good friendship were developed, and the spirit between the two teams was great. We look forward to hosting STAC next year down here.

The overall result was three - one to John McGlashan College. It is not long before St Andrew's College arrive in Dunedin for our winter exchange next term. 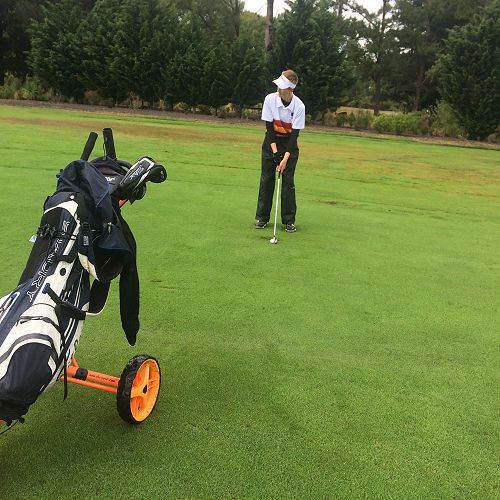 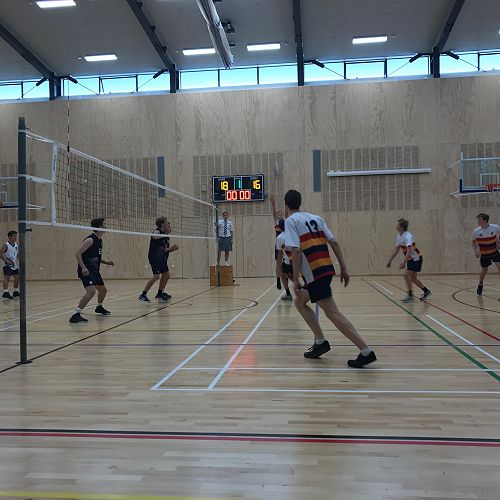