Great effort from the tennis team.

On 23 March, our John McGlashan firsts tennis squad flew to Wellington to compete in the National Secondary Schools’ Finals.

The team members were Carlos Reid, Mitchell Sizemore, Peter Hartono, Thomas Hartono and Charlie Davies. The tournament involved eight teams divided into two pools of four. We were seeded fourth, and the other three teams in our pool were from St Kentigern’s, Tauranga Boys’ College and New Plymouth Boys’ High.

Our first tie was against the strong New Plymouth team. Our two youngest players, Peter and Thomas, took to the court first, playing in the number three and four positions. It was a nervous start with these matches resulting in a a win and a loss. We then won every other match in the tie, making it a 5-1 victory to McGlashan.

We then came up against Tauranga Boys’. After the singles were locked up at 2-2, we pulled out two crucial doubles wins to clinch victory. Our final pool match was against St Kentigern’s, an extremely tough task as they are ranked the top school in New Zealand. While some of the matches in that tie were close, we ended up losing all four singles and both doubles. Nevertheless, we still qualified for the top four playoffs, finishing second in our pool.

Our first semifinal was against the number two ranked Scots College from Wellington. We got off to a shaky start with both our number three and four players losing comfortably. At one stage there was a glimmer of hope as our top two players, Carlos and Mitch, pushed their more fancied opponents, with Mitch winning a set in his singles. Carlos and Mitch then combined in the doubles to force a third set tiebreak but ended up losing a close encounter. Losing to Scots College meant that we were into the playoff for third and fourth against the other South Island school, Christ’s College.

We started promisingly, Peter Hartono winning his singles. After the remaining singles, however, we were down 3-1. We almost pulled the tie back with a bottom doubles win but were cut short as our top pairing went down in another three set battle. This meant that, for the second time in successive years, John McGlashan was placed fourth in the National Secondary Schools’ tournament. While we didn’t quite make it to the podium, the boys achieved some impressive results along the way and did the school proud. 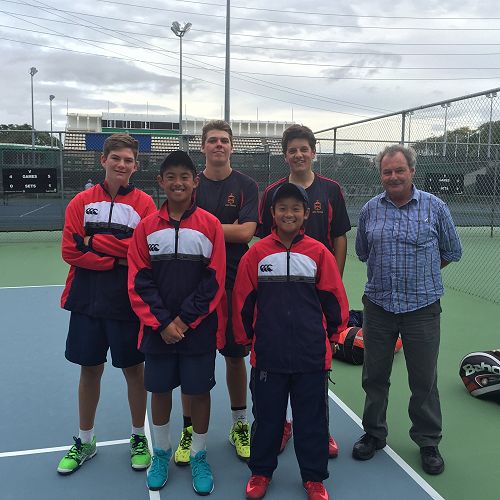