DUNEDIN HIGH SCHOOL PRODUCTION TAKES IT BACK TO THE 80s. John McGlashan College, in association with St Hilda’s Collegiate and Columba College, are proud to present: ROCK OF AGES: High School Edition.

This rock musical by Chris D’Arienzo and Ethan Popp premiered in Los Angeles in 2005 before transferring to Broadway for 2,328 performances. Tours have crossed the globe from Japan to Australia the United Kingdom and beyond. The show was transformed into a Hollywood film starring Russell Brand, Tom Cruise and Alec Baldwin in 2012. John McGlashan College is thrilled to present the Dunedin premiere of this rocking production.

We follow the story of Sherrie Christian, a small town girl who’s just moved to the bright lights of LA to follow her passion for acting. Her dreams all seem to be coming true as she scores a job at the iconic ‘Dupree’s Bourbon Room’ and a date with the dreamy Drew Boley – but the Bourbon is under attack from jet setting city planner Hilda Klinemann, and there’s a rock star on the scene. Will dreams become a reality in the city of angels? Or is it all going down in flames?

Featuring the music of Styx, Poison, Europe and many more, this production is sure to take you right back to the 80s!

The Davies Sports Centre will be transformed into The Bourbon Room for three nights only and this talented cast from John McGlashan College, St Hilda’s Collegiate and Columba College is set to blow the roof off for this electrifying production.

Get your tickets from http://www.dashtickets.co.nz/ 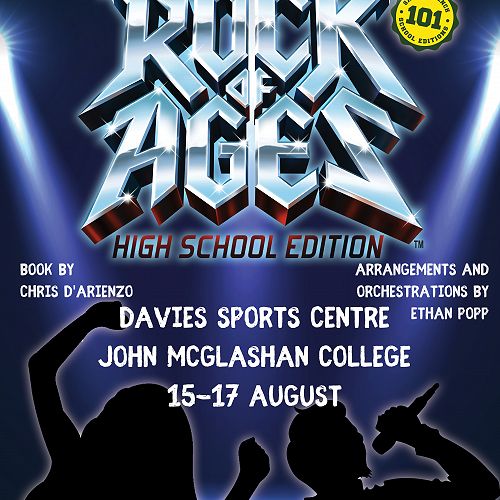