A good first day on the Coast. Two wins from two games.

This team was in the finals last year and proved to be tough competition, although to be fair, we were the better team just that our unforced error rate keeps the score too close for comfort. Notably Mt Aspiring only just beat Lincoln later in the day. Bailey Dowling was in rampaging form and made huge meters up the paddock leaving opposition players distraught on the ground behind him.

Twenty minutes each way is a long time at the end of the day! We played well from 1 – 22 and come away with a good win. One game left in the pool tomorrow being Darfield who have yet to record a win. Sam Knight had a blinder both on defense and attack. It was the sort of no nonsense attitude we have seen at times during the season.

The weather has been brilliant to date and the hospitality and food at the Recreation Hotel have been awesome. The boys are being well fed that’s for sure. There is a pool across the road from the Hotel but unfortunately closed for 3 months so we braved the Greymouth beach which is not exactly picture postcard but did the trick tonight.Big day again tomorrow and hopefully we should make the playoffs.

Day three and WE ARE THE CHAMPIONS!

Amazing day of adrenalin, excitement, and reward. The boys kept getting stronger and stronger every game, especially on defense which in the end won us the final. Unreal effort boys after 6 tough games over the last 3 days.

Started well and stayed solid throughout with South Otago scoring from random opportunities. Good to have this win over our southern rivals who have won this tournament a few times over the years. Now into the finals!

We started intensely and rocked the Gorons by being in front by 10 to nil after only 10 minutes with our first try to George Bell (The Terminator) from driving play and well supported in the tight by Liam Ferguson and Jack Murray. Zach Smith scored a short time later out wide after a massive JMC attack within Gores 22. Gore scored right at half time to bring the score to 10 5 at the break. Their forwards put relentless pressure on us in the 2nd half but the boys defended so so well. Sam Knight slammed his opposite in the back line time after time and Henry Power lowering some of the biggest boys on the paddock with awesome tackling around the boot laces. We stole a number of their lineouts through Caine Taylor’s prodigious timing and lifters Tom Copland and Sheep. Jack Colborne won all his lineout ball to provide our backs with the best clean pill for attacking. With the score now 10 all - Tom Colborne attempting to steal Gore ball at a breakdown (as he did all day) and they were pinged for not releasing. Andrew McKenzie stepped up and slotted the perfect penalty goal to stick it up the element in the crowd that was booing and chanting ‘he won’t get it’ yeah right he did! Elias O’Kane made some great breaks with his silky stepping. Caleb Moody was hungry and went looking for work all day. Dominic Morrison maintained the rear guard with a couple of breaks up over the advantage line. The last five minutes were nailing biting! It felt like the referee wanted Gore to win and he awarded them a penalty 45 yards out. The score is 13 -10 to us and if the kick goes over, and at the end of play it is a draw, Gore wins as they got more points in pool play. Thank goodness it was too far for their goal kicker but a short time later (one minute to go) we were penalised again, this time only 25 yards out. Heart in our mouths, the kick was launched and the ball swung towards the left hand upright only to hit it and bounce into the field of play which was brilliantly caught by Josh Jukes who set up the ruck for JMC to clear the ball. 30 seconds to go and somehow the Gorons get the ball and they drive towards our line time and time again only to hit our wall. Suddenly they change tact and push the ball wide which is intercepted by Zac Smith and off he goes towards the other end of the paddock – he is run down and the ball goes out – whistle blows - GAME OVER! Our reserves Robert Millar, Tom Crawford, Hamish Lowery, Kaleb Hill, Riley Meason and LaQuan Sem-Cheyne played a huge supporting role in this win along with Bailey Dowling who could not play this game due to a broken wing.

A tournament team was announced after the game and we were very proud to hear threes names from JMC:· George Bell· Bailey Dowling· Andrew McKenzie

Thanks to the many parent's supporters here and once again our sponsors: Ferguson Trucking, Southern Vegetation Control, Central Seeds and Chemicals Ltd, Southern Baling Ltd, and Biostart. 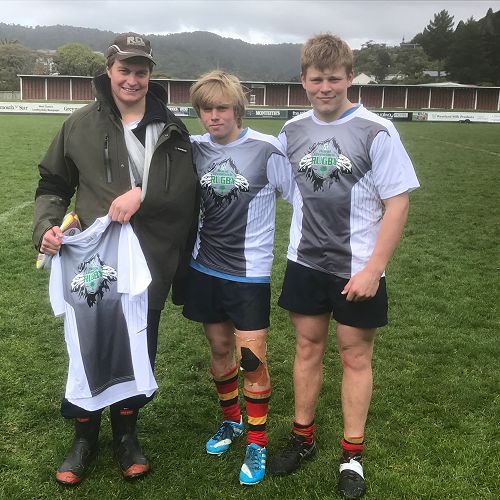