Over the last few months there has been a growing number of JMC boys giving squash a go.

The school is fortunate to be situated close to Otago Squash Club and to have been offered a special membership rate for boys wanting to join up for the rest of the year. Once a member, boys can use the courts at any time to have a hit with another member or a non-member (honesty box for casual fees). Membership of the club also entitles boys to join in any of the many activities of the club including junior club night (Friday), club hits (Saturday) and Summer League (starts in Oct).

Recently our squash boys have taken part in a John McGlashan Squash Open tournament run by Mr. Randal Scott. This competition was aimed at all levels of players and provided the opportunity for boys to play against others of similar ability, learn the rules of squash and learn how to score/ referee a match. Many of the boys that took part in this event are now keen to take their squash to the next level and we are looking to put in place some quality coaching in term four.

Three of our boys also recently took part in the Otago Top Schools Squash Competition held at Otago Squash Club (Raunaq Bhabra, Jamie Shand & Michael Beattie). Although our boys were graded lower than their opposition and found the competition to be tough, they all enjoyed the event. They are now motivated to further develop their squash game and hopefully challenge competitors in future events.

If your son is interested in giving squash a go, please ask them to come and talk to me about the opportunities available. 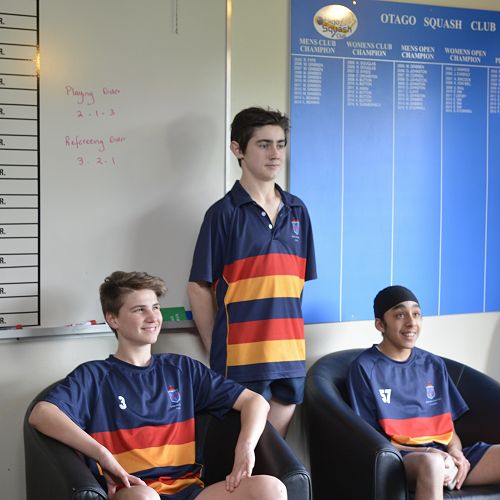