One hundred and forty prefects from the 12 Dunedin high schools met up to be inspired to lead and to learn from each other.

The first Wednesday of Term 2 was a miserable day outside with the weather, however, that did not keep most of the Dunedin  Year 13 leaders in making their way to John McGlashan for the first ever 'Prefect Network Meeting.' All prefects from all of the Dunedin schools were invited as well as any other Year 13 student from John McGlashan that was interested in being involved.

As this was the first of this type of meeting, no one was sure what to expect, but the afternoon was a resounding success. The afternoon started with an afternoon tea where the students mingled with each other. After that, the guest speaker Anne Bond took the stage to talk about 'Integrated Decision Making - Using your mind, heart and gut to make decisions.' Anne is an experienced coach who has provided leadership training for some of the top companies, CEOs and Military leaders not only in New Zealand, but in many countries overseas.

During the final session, our prefects lead mixed groups of other prefects ins round table discussion about leadership, what roles they have at their school and what their thoughts were about the future.

Kavanagh College has stepped up to lead the next Dunedin Prefect Network meeting, which will take place either later in Term 2 or early in Term 3. Hopefully this innovative idea is one that will have a strong tradition for future years. 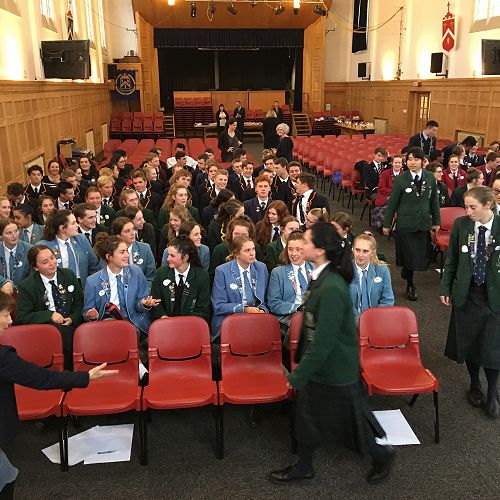