Ben Porter, selected for the National Schools Shakespeare Production in Wellington, got to flex his dramatic skills in Shakespeare's Macbeth over the term three holidays. Here, he shares some of his experiences.

National Shakespeare Schools Production is a week-long Shakespeare camp run by Shakespeare Globe Centre New Zealand and I was lucky enough to be selected alongside 46 others from the national and regional festivals to go and partake in an amazing event. This year NSSP was held in the countries capital, with home base being St Patricks Silverstream. Twenty-four boys and twenty-four girls from across New Zealand were split up into three total groups. Macbeth, Henry V and Midsummer Nights Dream, I was selected for Macbeth directed by James Cain.

After settling into the boarding house at St Pat’s, each group met with their director and went over the goal for the end of the week. Each day followed a rigorous routine of Waiata/Haka Practice, rehearsals, workshop 1 and 2, lunch, workshop 3, rehearsals, line learning, and sleeping.

Over the seven days, each group of about 15-16 students had to learn a 40-page script which pieced scenes from their selected play together. The days were long and exhausting, and 48 budding actors all living together wasn’t the place you’d want to be if you were looking for peace and quiet. Over the course of the week, everyone was looking towards the primary goal, and that was putting on two excellent showcases of Shakespeare for the general public at both the Pipitaea Marae and at Parliament.

The showcases would span the whole day, arriving at the destination early in the morning and then rehearsing non-stop until the first performance commencing at 7 pm. I played a range of characters in Macbeth such as Malcolm and one of the three witches. What trumped all of this hard work and exhausting days was being able to act alongside some of New Zealand’s finest young actors from across the country.

Having this opportunity to meet 47 other outstanding actors and become life long friends with a lot of them was phenomenal, I was fortunate enough to be shortlisted for the NZ Young Shakespeare Company for 2020 which travels to London to perform at the Globe Theatre itself.

I hope to come back to McGlashan next year to direct a piece for the Regional SGCNZ UOSWSF. 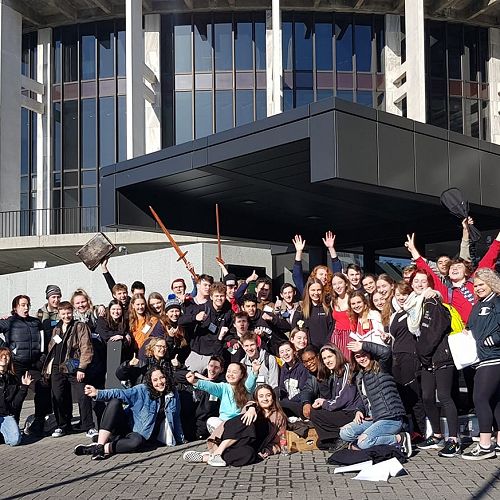