Our rowing coach Michael Goldsmith takes a look back at what can only be described as a fantastic year for our entire rowing squad.

The McGlashan rowing squad has just completed its most successful campaign ever, building on the progress that has been made over the last few years. The results achieved this year have resulted in John McGlashan rowing getting some serious attention from the rowing community, as it matures into a ‘proper’ rowing school – which can take on outfits such as Hamilton Boys and Christ's College, which have significantly larger programs.

This success is undoubtedly due to the increasingly professional approach being taken by athletes and support staff alike. An extensive spring and early summer training program meant that the rowers hit the main regatta season almost at full speed. Over the Christmas break most boys committed to extra, individual training at gyms and other rowing clubs, and even in the rural back blocks of Otago, and came back in late January pushing for places at the Maadi Cup. This commitment meant that all rowers within the McGlashan rowing squad were selected to attend national level regattas. Age group squads were chosen to attend the Maadi in Cambridge, and a young, but determined group of athletes also attended the National Club Championships in Twizel, competing against the top club rowers from around the country

The results from the late season regattas are outstanding and too many to list in full, but the highlights include:

Special mention must go to the 3 coxswains (Cameron Leydon, Cory Beaumont and Michael Beattie) who fully committed to the campaign and who helped inspire some of these winning crews. Also, their committed coach, ex-JMC rower Mitchell Parks. Other athletes who made significant contributions to the squad were Robert Sangster, the Maadi Cup U17 Quad of Thomas Benny, Josh Smith, Ben McDonald and Max Gomez, up-and-coming U16’s Nick Chamberlain and Jez Nicholson-Kelly, and two novices with big futures - Patrick Larrivee and Josh Dukes.

The final word must go to Bradley Leydon, who finished off a highly successful campaign by winning the U18 Single at Maadi, and then going on to be selected for the New Zealand Junior Squad to compete in Lithuania later this year. In preparation, Bradley will spend 3 months in Cambridge over the winter, training alongside New Zealand rowers – this is a truly exceptional performance from a talented rower with a professional approach to this great sport. 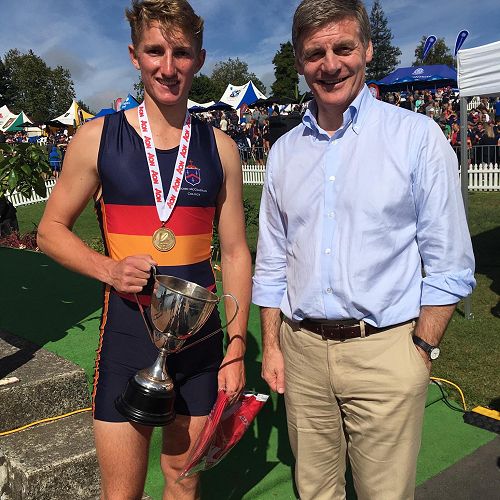