"It was a stunning day and with the Mt Cook lilies in full bloom and the sound of avalanches in the distance."

Due to an unfortunately timed NCEA maths exam, 10SMC had no choice in the camp we attended - and we headed off earlier leaving on Thursday 12th of November. Roadworks slowed us down, but we eventually made it and set up camp, before heading off to a practice water crossing, and returning back to camp as the sky began to darken.

On the next day, we set out on a tramping trip, walking for about three and a half hours, making two river crossings before reaching ‘the hut’ and setting up camp nearby. Aside from one incident where I couldn’t stop shivering and had to pull out a thermal accident blanket to warm up and some absolute failures of meals, the day went by smoothly.

The next day we climbed the nearby Mt Mason, going through dense bush and over a large collection of small rocks that resulted in the climber sliding slightly backwards whenever they took a step forward. The winds at the peak were brutal, but we still managed to make it down in time.

By this point, several boys had come down sick with cold-like symptoms, and three of them had to stay behind on this day. But on the next day, they had to come with us, as it was the last day tramping and we could hardly have left them there! This time the walk took around three hours, and after we had finished the rest of the day consisted mostly of waiting around and sorting gear - playing cards, throwing a ball around, chatting, and so on. That day was brought to a conclusion with a delicious meal of meatballs made by wonder chef, Mr. Wang. This was followed by apple tart with custard and cream.

On the final day of walking, we went up to Aoraki/ Mount Cook for a more sight-seeing oriented tour, walking through Hooker valley and back again, then to Lake Tasman. It was a stunning day and with the Mt Cook lilies in full bloom and the sound of avalanches in the distance. Aoraki was in perfect view with a fresh coat of pure white. Stunning.

And then, on the next day, we headed back home in the vans, stopping at Kurow for a treat of fish and chips. The memories of this unforgettable trip were still fresh in our minds as we travelled south.

Thanks to Mr Casey for organising the Year 10 camps and Mr Cartwright, Mr Wang and Mr Campbell for doing such a great job leading the camp. 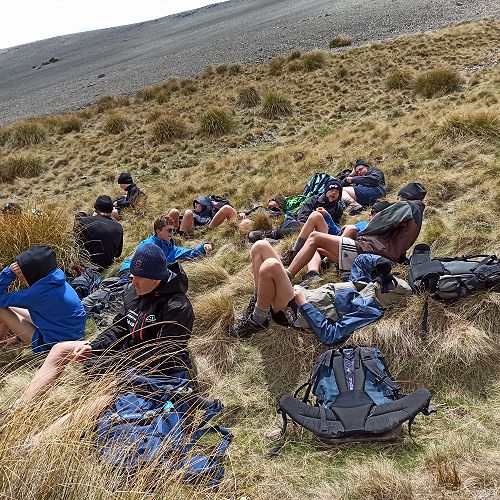 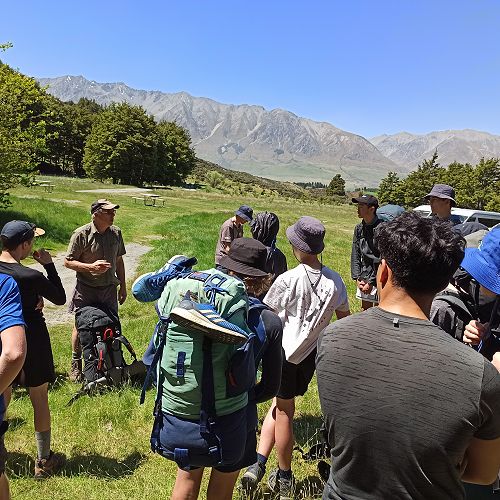