St Andrew's travelled down from Christchurch and played John McGlashan and Timaru Boys' in Cricket, Touch, Golf and Tennis.

Negotiations to develop a junior sports exchange between Timaru Boys', St Andrew's and John McGlashan College have been ongoing for over a year. The wait was worth it as the concept and content were of the highest calibre. John McGlashan travelled to Timaru on the 27th of November and met the travelling St Andrew's junior sports group. John McGlashan stayed overnight and then played Timaru Boys' on the 28th. We played cricket, touch and tennis. St Andrew's was unable to field a golf side, so our golfers played a practice round under the tutelage of Mr Colin Gray on day one of the exchange. Weather conditions were magnificent, as were the facilities around Timaru.

Our cricketers met an extremely strong STAC team. The Christchurch side scored 206 for 1. The bowlers struggle against the topside in Canterbury. Our batters didn’t fair much better scoring 110 for 9 of our allotted overs. The McGlashan cricket side has some quality players, and this was evident in their second match against Timaru Boys'. The opposition was bowled out for 143 in 27 overs. Adam Harbott and Oscar Sycamore took three wickets each. The Timaru total was over hauled in 30 of the allotted 40 over with six wickets down. Each of the top six batsmen contributed with Toby Dean top scoring with 42 and Captain Ryan Johnstone seeing the team through to victory with 36 not out.

We have a talented group of touch players coming through the school. In fact, after their performances over the two-day exchange, they are identified as teams that could play at South Island and National level. Touch had a clean sweep over the six games against STAC and Timaru Boys'. St Andrew's has a touchback round, so it was pleasing to convincing beat them in three matches. Timaru Boys' were tougher opposition, and even with the addition of a senior student, McGlashan was too strong. There is now a culture of touch developing in the junior school. Exchanges like these are important for the development of the code as we look to attain South Island status.

Similarly, we have a strong core group of tennis players coming through the college. Again the aim is to create a pathway for boys to compete at South Island level. The present crop showed great potential in only dropping two games in each exchange. There is good depth throughout the whole squad which is very encouraging. Logistically the exchange was a success with highlights for the boys being two hours at the swimming pool after a hot day playing sport followed by fish and chips and bbq tea followed by a visit to supermarket followed by games in the park until dusk. Thanks to Messers James, Gray and McCall for leading the exchange. Mr Tony Sycamore also accompanied the boys was of great help throughout the two days.

Golf was played at the Timaru Golf Club (Levels) course. This is a moderate length, relatively flat and open course containing a sprinkling of strategically placed bunkers and an artificial lake edging three or four fairways and greens. The course was in fine condition, and with the sunny weather and very warm temperatures and light winds, the scoring should have been good on both days.Day one began with disappointment upon learning that our STAC opponents could not field a team. However, this meant an extra opportunity for our team of four led by Callum White to benefit from practice on the competition course. The boys played one round of eighteen holes in a one against three format with Callum playing off his official handicap of 4 while ‘giving’ our three other team members (Caleb Le Cong, Adam Woodhouse and William McLauchlan) 20 shots each. Callum’s score counted against the best of that of the other three boys on a hole per hole basis. Although neither Caleb, Adam or William claimed official golf handicaps before this contest, the result proved a closely fought one with Callum eventually prevailing by one hole overall. Callum’s score of 77 gross, was pleasing given our unfamiliarity with the course. But the real feature of the day was the improvement in both technique and consistency shown by Caleb, Adam and William over the course of the round. Day two saw us arrive early at the venue to do some further practice, confident we could represent our school well. The Timaru Boys' team turned up with minutes to spare before the appointed tee time, but the fact that there were other club players on course in front of us reduced any need for urgency. We agreed on a match play, alternate shot team format pairing the two top seeds and two bottom seeds from either school team against each other. The contest would run over 18 holes, but obviously may be won in fewer. As it transpired, the team from Timaru were relative novices, none of whom had official handicaps. And so it became apparent from the start, we would be favourites to win. This proved to be the case. Callum and Caleb (our top seeds) won in straightforward fashion by dominating the first 10 holes to prevail 10 up with 8 to play, while our lower seeds (Adam and William) wrapped up their result almost as quickly winning 9 with 7 to play. With both contests being over as matches roughly halfway through our planned time on the course, the boys went on to complete most of the remaining holes on a casual basis. We finished with enough time in hand to go back to ‘School Park’ and support our cricket boys.

My congratulations go to the team for their efforts, and also their exemplary attitudes and behaviour over the two days. My thanks also to our sports department’s organisational skills and the Timaru Boys' junior golf team and staff for making the exchange such an enjoyable one. 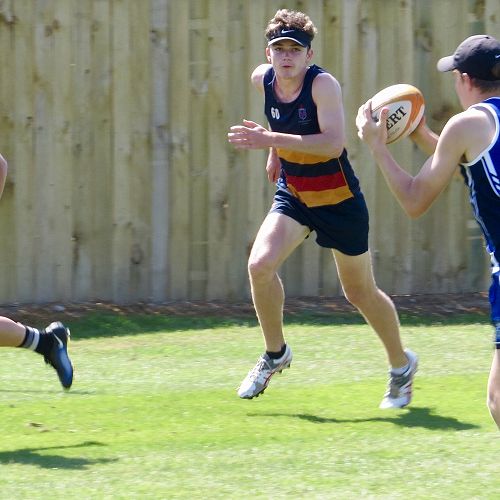 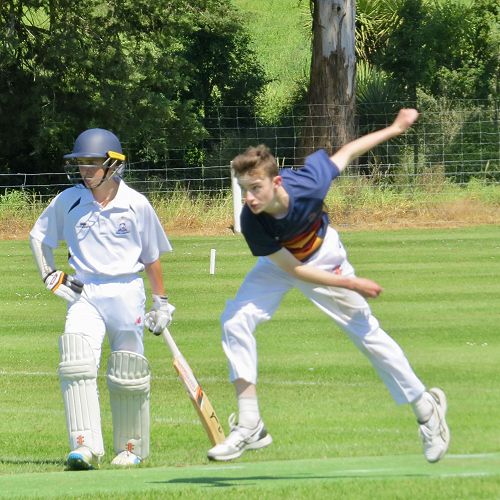