On Wednesday 7th April the school hosted some big names that will be competing in this weekend's Otago Rally. Students from Year 7-10 gathered in the chapel to hear about their experiences.

In Year 8 one of the novels studied is "Slide the Corner" by New Zealand author Fleur Beale, in which a Hamilton teenager follows his dream of being a rally driver. The majority of Year 8-10 boys have read this novel, which made yesterday's visit all that more meaningful.

Hayden Paddon, New Zealand's most successful rally driver, talked about his climb from beginner to professional racer, and the discipline and determination needed to make his dream a reality. The boys had a multitude of questions for him and listened attentively as he described some of his more memorable moments while racing.

Carl Davies and Markko Martin, two seasoned rally drivers down as special guests in the Otago Rally, also talked about their experiences in the rally racing world. Markko Martin described the competitive lifestyle  and pressures that came with racing for a company. Carl, along with his co-driver, talked in detail about the many things to think about while racing.

At the end of the presentation three lucky students received VIP passes to the upcoming rally, and a throng of boys massed around the drivers to get autographed posters and stickers. Needless to say, there were many happy faces buzzing about the visit as they poured out of the chapel and gathered around the rally cars on display in the courtyard.

As a gesture of appreciation some of the year 8 boys signed a copy of "Slide the Corner", also signed by the author, which was presented to Hayden Paddon by Roger Oakley, who helped organise the visit. 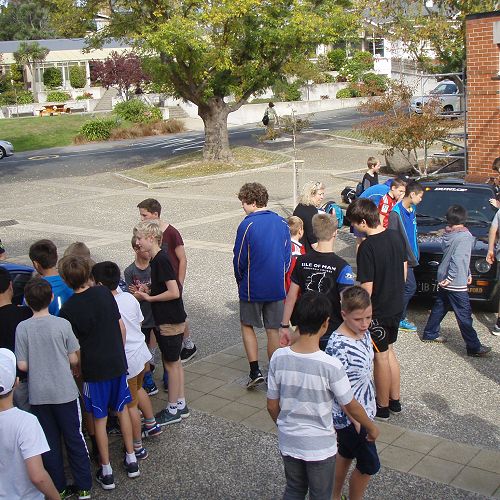