The NCEA2 Drama class are currently working on a  drama devising achievement standard, using stories surrounding the events of September 11 2001. This week they were visited by Lara McGregor, Artistic Director of the Fortune Theatre, who was in New York City the day those terrible events unfolded.

Students have been exploring stories from that tragic day in a number of ways. Looking at its effect on service personnel (fire fighters and police officers), survivors from inside the World Trade Centre Buildings in New York City and the Pentagon in Washington, and families of commuters on United Flight 93 which crashed into a field in rural Pennsylvania, killing all on-board.

Students were fortunate to have Lara McGregor visit their class to talk about being in New York on 9/11. She told students how on that beautiful blue skied day, she was waiting for a moving truck to arrive and pack up and move the contents of her and her partner's apartment across the country to Los Angeles (where they would continue their work as actors), when early morning the country encountered multiple terrorist attacks. The island of Manhattan was immediately put into lock down, stranding millions of people, including Lara and her partner.

Lara spoke of the almost surreal nature of this day. She said the first thing they did was walk to one of the local hospitals to give blood, thinking it would greatly be in need and was the best thing they could do at that time. Loads of Manhattan locals were thinking the same thing and the wait time to donate blood stretched over four hours.

Amazingly, the next day Lara and her partner were still able depart the city as planned in their packed-up SUV over the only bridge still open in New York,  the Verrazano-Narrows bridge, and drive down the east coast. They also drove through Washington D.C and the past the Pentagon, which was still burning after being struck by another passenger jet taken over by terrorists.

Drama students also got the opportunity to ask Lara any burning questions they had about what it was like being in America during and after the attacks, and how the different community groups responded and reacted to what was going on in their country.

Students will spend the remainder of the term devising, reshaping and rehearsing their 9/11 inspired drama pieces. Lara has also asked to come back to John McGlashan College to view what the students have come up with later on in the term. 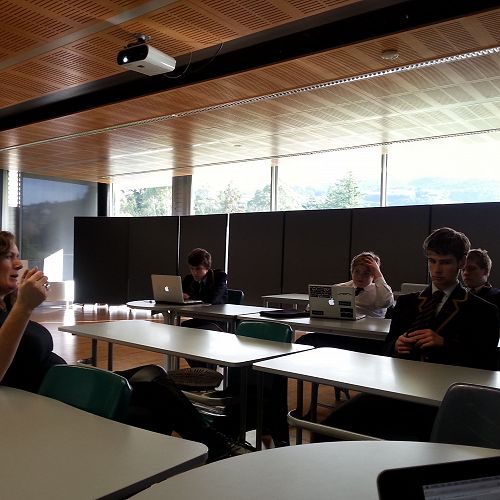