2018 has been a year filled with many successes for the Senior 1st futsal team, with accolades having been achieved at both a regional and national level.

After recently wrapping up both the Dunedin and Otago Secondary Schools titles, it seemed only natural that the boys would progress to a greater level of challenge and competition. Therefore it was identified that the New Zealand Secondary Schools Futsal Tournament (NZSSFT) was the right place to achieve this goal; a chance to cut our teeth against some of the country’s premier footballing institutes.

Subsequently, it was with great anticipation that we stepped off the plane in Wellington, eager to be set loose on the tournament. In our first fixture, we encountered De La Salle College, who were easily swept aside 9-1. A truly dominant and team-oriented performance to start the tournament, with notable contributions from Shay Veitch (3 goals) and Harrison Biggs (4 goals). However, it was during our second game of the day in which we were drawn back into reality, receiving a 6-0 drubbing from a slick Tauranga Boys High School unit. It was on this note that we ended our first day in Wellington with mixed feelings, the euphoria of our first win somewhat drowned out by a heavy defeat.

As a new day dawned, the boys were back at the courts bright and early, with the aim of avenging yesterday’s defeat. Victory, however, would be no easy task, with the might of group leaders Shirley Boys High School standing in our path. In a surprising turn of events, we streaked out to an early 2-0 lead, hitting the back of the net twice within the first ten minutes. As half-time approached the lead remained intact, despite Shirley pounding us with attack after attack. However, in almost gut-wrenching fashion with 10 minutes to play, Shirley managed to break the deadlock, pre-empting an opening of the floodgates of sorts, in which we were helpless as goal after goal pummelled the net. As the full-time siren sounded, we had lost 3-2, and our chances of a finals berth had gone up in smoke. Admittedly following this defeat, morale was at an all-time low heading into our matchup against New Plymouth Boys High School. Therefore it was in stoic fashion with which we picked ourselves up, and eked out a 3-2 victory. This result ensured a 3rd place in our group of 5 and left us bound for the 17-24th place play-offs.

Perhaps in the vain of misfortune with which our finals hopes had crumbled, we were drawn against St Patricks College, Wellington in our first play-off game. Not only did they boast an impressive squad of 12 players compared with our 7, but they were also last year’s champions, and had revenge in mind after being dumped out in the group stages. They hit us hard with everything they had, and not even the skilful and hardy defensive front lead by Ben Lund could stop them, as we eventually went down 4-2. This defeat left us to play Rathkeale College in our final game, which we emerged victorious with a 4-3 result.

Overall, the experience of playing against many of the country’s top schools was a rewarding one, and I’m sure all the boys feel like they have made improvements from it. While we were placed around the middle of the pack of 36 teams, a higher placing was very much within our grasp and should be very obtainable for the five members of our squad who will hopefully be back for another shot next year. I would like to thank the travelling squad of Jaiden Tucker, Cam Johnstone, Ben Lund, Shay Veitch, Cade Mcrae, and Nathan Harrison for an excellent tournament, and on behalf of the boys, Mrs Veitch for travelling with us and providing us with meals and transport to the games - your effort was much appreciated. Lastly, a special mention to Shay Veitch who finished the tournament as the second equal leading goal scorer, well done. 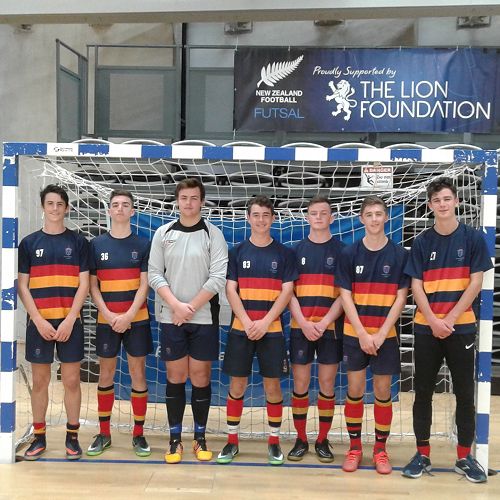