The John McGlashan A Tennis Team was placed second in the South Island Tennis Champs and will now look forward to representing their school at the Secondary School Nationals in Wellington.

Our first tie was against the young team from Mount Aspiring College who were all Year 9 and 10 boys that fought well. We came out on top with a comfortable victory, winning all six matches. We were then faced with the tougher task of playing Otago Boys’ High School. Although some games were close we won three of the four singles and both doubles matches, giving us a convincing five to one win overall. With these results, we were able to represent our school in the South Island Secondary Schools Championships.

The South Islands were held in Timaru (6–8 March). Teams from six schools qualified to compete in the boys’ division for two places in the National Secondary Schools teams finals.

Over the three days of the tournament our boys played a total of 5 singles and 5 doubles matches. Our teams’ strength was boosted with two highly ranked junior players, Peter and Thomas Hartono, playing at three and four, leaving the two Year 13’s Carlos Reid and Mitchell Sizemore at one and two. We had the luxury of playing our travelling reserve Josh Caldwell in the 5th spot. We were well supported by Anna Reid our manager and Dennis Radford our coach.

The competition was extremely tough and pushed every player to his limits, mentally and physically. Every match against every school counted and the competition for the two places at the Nationals went down to the very last match between Christ’s College and St Andrew’s, as the scores were tied between the top three seeds.

To our delight we pipped St Andrew’s for second place and the opportunity to play against the top North Island secondary school teams at the NZSS Finals in Wellington (23–26 March). 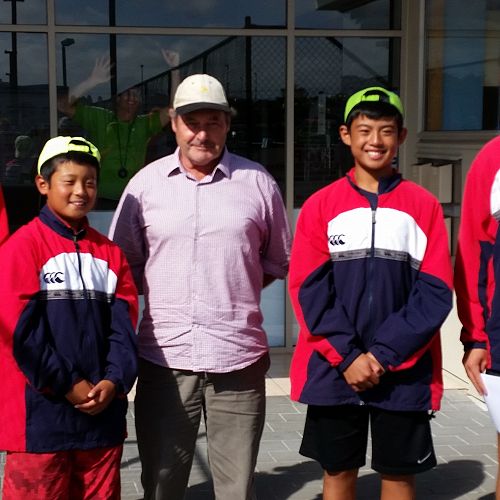