Nathan has worked tirelessly to meet this goal of being Dux of the college. Nathan completed the IB diploma this year and achieved excellent results across all his subjects. Nathan, we hope that you achieve the grades you deserve in your recently completed final examinations.

Next year, Nathan is looking at studying psychology and English Literature at Otago and will be staying at Studholme College.

Ben also studied the IB diploma. He had several grades in the 80-90% range and, for most of his other subjects, he gained Excellence endorsement. Ben has always been a hard-working student who has strived to achieve at the highest level. He has a high predicted score and we look forward to seeing the results of all his hard work. Next year, he is going to study physics at Canterbury University and will be staying at Rochester and Rutherford Hall.

Krishan undertook the IB diploma this year and has excelled in all his subjects, achieving several marks in the 80s and 90s. He received an Otago University Academic Excellence Scholarship for next year. As well as being one of the top academics at the school, Krishan has played a number of sports, has been involved heavily in community service and, of course, has served the college as Head Prefect.

Jonathan also completed the IB diploma this year and has gained high grades across all his subjects. He has been one of the top academic achievers in the school since Year 7. Jonathan has gained scholarships at both Otago and Canterbury Universities. He has worked diligently over the last two years to ensure that he has maximised his learning potential. Next year, he is going to study physics at Canterbury University and will be staying at Rochester and Rutherford Hall.

Ben has excelled academically during his time at the college, gaining Academic Excellence Awards every year. He was part of the Engineering Science Competition team that received a highly commended award. He has received two University of Canterbury scholarships.

Ben has also been involved in sport – namely waterpolo and futsal, playing both sports for most of his time at the college and is a Blues recipient for waterpolo. He is a keen debater and has been active in a wide variety of community service.

Robert is an outgoing student who has been involved in all aspects of the college. He has played a number of different sports for John McGlashan, has a sound academic record and is involved in a wide variety of service opportunities. He has shown positive interpersonal skills that allow him to adapt to different situations and get along with a wide variety of different people. Robert finds it easy to spark up conversations with a vast range of different personalities and this allows everyone to feel welcome and part of the school family. If you are looking for a student to complete a task, Robert is your man.

Jonathan receives this award in recognition of his excellent service to both the community and college, particularly upholding Christian values. Jonathan has been extensively involved in Chapel services and served as Special Character Prefect in 2020. He has been involved in science initiatives, particularly sustainability projects in the wider Dunedin community. He has also mentored and tutored younger students at the college. Congratulations and thank you Jonathan for your commitment.

Loyalty and Contribution to the college

In addition to the Head Prefect award, Krishan is also rightly recognised for the Ted Friedlander award for loyalty and contribution to the college. With every step this year, and every speech or last word, Krishan has endorsed the values of the college. This has been particularly notable in his leadership of the other boys. It has been a challenging year, and Krishan has been a calm, steady presence, emanating a sense of unity and inclusivity at the college. His contribution has been invaluable.

The Jonoel Award for Supporting the college’s Special Character

When asking staff for nominations for this award – Max was consistently the student who was suggested. He has a maturity beyond his years, is always positive in his dealings with staff, peers and younger students and - through his actions and attitude - embodies many of the attributes we value at the college. Max has been a service prefect in 2020, and his excellent leadership has been at the fore in organising events and volunteering both at the college and in the wider community.

Principal’s Award to the Head Prefect

The Lead and Inspire Award recognises the responsibilities and contributions the Head Prefect makes each year. Krishan has been an excellent ambassador for the college during numerous events and celebrations. He has been a great role model for the students and his warmth, compassion and positivity is infectious. Krishan’s contribution to the college is thoroughly appreciated.

Para-athlete, Liam Wilson is the New Zealand record holder in seven events, including the T37 Senior men’s long jump. He is a member of the Athletics New Zealand High Performance Development Squad and has met qualifying standards for the Tokyo Olympics.

Rower Angus Kenny claimed a silver medal in the South Island Secondary Schools’ Under-18 single and was third in the Club Nationals Under-20 double. Angus was selected for the New Zealand Junior Trials and is in the Open and Under-20 Otago rowing teams.

Dominic takes the title of Best All Round Athlete ahead of a group of multi-talented individuals. Dominic has represented Otago in touch. He is in the Senior A touch and basketball teams, First XV rugby, and a member of the athletics team. In athletics, Dominic was a member of the victorious 4 x 400 relay team at the New Zealand Secondary Schools’ Championships and won the individual 400m at the Otago Secondary Schools’ Athletics Champs.

Once the school year had finished in 2019, a dedicated group of athletes competed in the New Zealand Secondary Schools’ Athletics Championships in Wellington. In the final event of the meet, the 4 x 400m team won a thrilling race by a fraction of a second after Shay Veitch dove over the finish line. This event was held after the 2019 Senior Prize-giving and therefore is eligible for the 2020 award.

Robert is the Head Boarder in the hostel and is also Deputy Head Boy.

In the boarding house, Robert is a great leader and role model for our junior boys. He helps to organise activities for the junior boys, tutors and encourages boys to try new things. Robert has been asked to help out with a number of different tasks and all of these were done without any hesitation and extremely well, with enthusiasm. Robert can always be trusted to get the job done. Robert backs up his leadership with a solid academic track record. He is a true leader in the boarding house; someone that the juniors look up to and aspire to be.

Rural Student of the Year

Ashley Stevenson has impressed this year with his academic record, and his commitment and dedication to his work. This has been reflected with him already gaining an overall Excellence Endorsement at Level Three and an Excellence subject endorsement in both agriculture and agribusiness. He backs this up with his enthusiasm towards sport, and was recognized this year by being the captain of the Under-18 Blue rugby team.

In the boarding house, he is committed to helping encourage the next generation of boarders to achieve their best by helping out boys who need support with their academic studies, getting junior boys involved in activities, and being a positive role model in their lives. Ashley has displayed a passion for agriculture over his time at the college, through his practical and academic knowledge of how different farms work. We wish him all the best for his future.

Krishan intends to study health sciences at Otago University next year and will be staying at Arana College. He has achieved excellent results in both chemistry and physics and this should ensure that he enters the competitive field of health sciences in good stead.

Most significant contribution to the Arts

Danny receives this award in recognition of his commitment to producing an art catalogue of the college collection, no small feat. This catalogue was finished, printed and bound just before the end of the year. He has worked consistently throughout the year, displaying student artwork around the college, and demonstrating a strong service to the arts. Next year, Danny is going to study design at Massey University.

Joe receives this award in recognition of his outstanding contribution to music at the college. Joe has participated in a range of disciplines, including jazz band, choir, RockQuest, as well as organising musical performances for school events and mentoring junior bands at the college. Joe is going to study electrical engineering next year at the University of Canterbury.

Premier Award for Passion, Interest and Excellence in Literature

Nathan receives this award for outstanding achievement and service to the college in the literary arts. He is a talented writer, and you would not find anyone more passionate about literature in all its facets. Nathan was a winner in the Re-Draft competition in 2019, a nationwide competition which sees gifted young writers published in a nationally distributed journal. He has also edited work for Inkster at the college, and mentored younger students with their writing. Last year, Nathan achieved scholarship English while in Year 12. He is working on a plan for a novel to begin writing this summer. This year, he was awarded a cultural Blue for writing and literature. 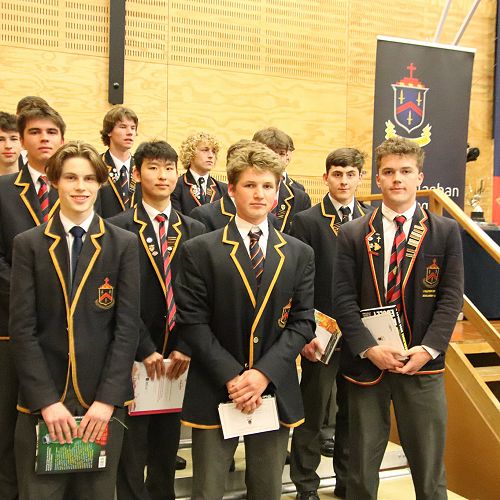 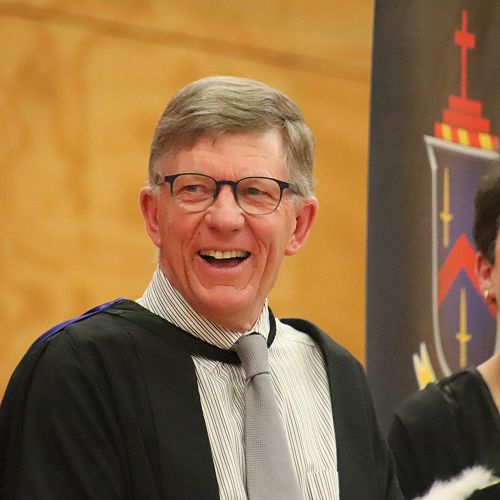 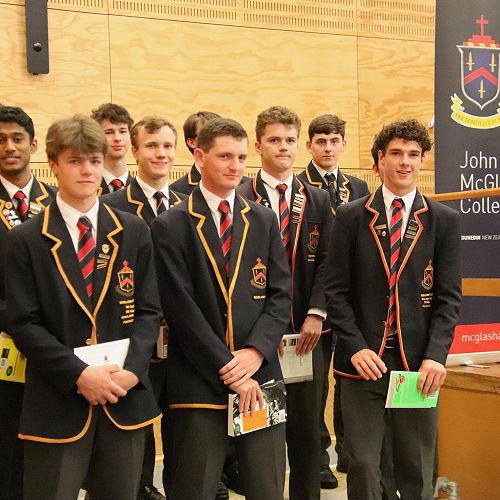 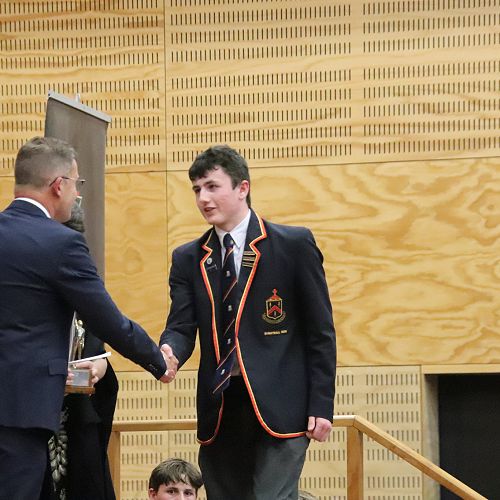