The McGlashan Pipe Band has is becoming quite active with huge successes for some individuals.

On the 20th of October,  five members of the John McGlashan Pipe Band competed at the Southland Centre Solo Bagpiping Competitions in Invercargill. There was a great success from band members. Qwenton McKenzie placed 2nd in the D grade Piobaireachd (pronounced "pee-brock") and received very highly commended in the D grade 2/4 March. The Pipe Major Matt Cresswell (Taieri College, Year 12) won the C grade Piobaireachd, Hornpipe & Jig and the B grade 2/4 March. He was also 2nd in the B grade Piobaireachd and was the runner up to the overall C grade winner.  Daniel O’Brien (Year 8), OE Haywood (Year 10) and Poppy Hayward (Year 11, Logan Park High School) all played well, but unfortunately were not placed. Finally, one of the tutors, Louis Davis, placed numerous times at the event, which included winning the A and B grade Piobaireachd and the A grade Southland Centre Championship Strathspey & Reel. Winning these two events saw him win the U21 division as well as the A and B grade overall.

Over Labour Weekend, Matt Cresswell, Louis Davis, OE Haywood and Poppy Hayward travelled to Christchurch to compete in the Silver Chanter Solos, which is one of the toughest competitions of the year. Once again OE and Poppy played well but unfortunately didn’t place. Matt came 2nd in the C grade Piobaireachd and Strathspey & Reel as well as 3rd in the C grade 2/4 March. Louis Davis received some places as well in the B grade. He achieved 2nd in the Piobaireachd, 3rd in the Strathspey & Reel and 4th in the 6/8 March. Of note, Louis came 2nd in the Under 21 NZ Championship Strathspey & Reel, and qualified for the Silver Chanter March, Strathspey and Reel.

The Pipe Band is always looking new learners, so if you want to join these players among many others and travel around New Zealand playing the bagpipes, snare, tenor or bass drums, contact John Veitch, and he’ll put you into touch with our excellent tutors. 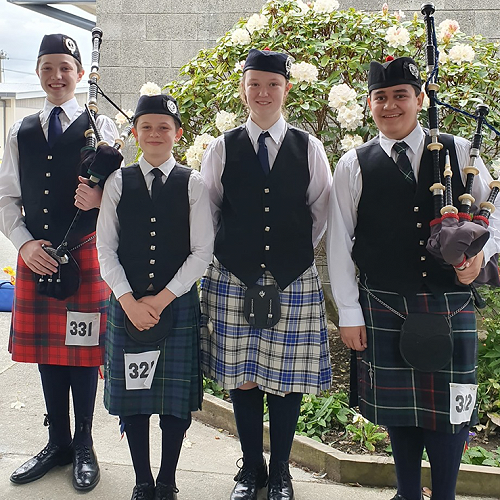